With so many modern landmarks about, people tent to think of them as just scenery to the city. But one artist has started showcasing them as fine works.

--- Stephanie Swift has been producing prints of these landmarks for a while now, showcasing buildings and signs that both document the past and remind of lost times. And with major recognition from art festivals and a spot in the Signed & Numbered gallery, it looks like we'll be seeing more prints in the future. I got a chance to chat with her about her work and career, the prints themselves, thoughts on the art scene and a few other topics.

Gavin: Hey Stephanie! First off, tell us a little bit about yourself.

Stephanie: Well, I was brought up in , moved to when I was 19, after a few years, I moved to , was there for a about 5 years. When was I there. I applied for a job at an advertising agency called DSW. I thought the job was for their office in , but instead it was for here in so I figured, "What the hell," and moved here. I was here for a few years and then moved to Dallas/Fort Worth for a job and then came back again. In all of those places I mostly have done design work of some sort.

Gavin: What first got you into art, and what were some of your early inspirations?

Stephanie: Well, when I was a kid all I did was draw, and doing something in art was all I wanted to do. As far as inspiration goes, that's tricky. It's not one particular art movement or style. A million things inspire me. I see a photo or hear a song and get inspired. I once based a painting off of dress patterns I found in the goodwill. In the last 10 years, I guess my main inspiration is letter press work and the sort of poster work that comes from places like The Hatch Show Print.

Gavin: Did you seek out any education in art? And if so, what was that program like?

Stephanie: I never took formal art classes. The only formal training I ever had was when I was first going into graphic design, I went to and took graphic design classes there. I have wanted to take formal art classes, but real life and paying bills always had to come first, so I have made do with just trying things out, and so far that's worked. I usually try to MacGuyver my way out of a creative problem. I still want to take some classes, but, time, etc. 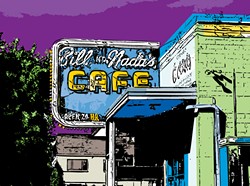 Gavin: What made you want to go into graphic design as a career?

Stephanie: My dad had a print shop when I was a kid, he had some letter presses and offset presses, so since I was small, I was surrounded by that type of thing. When I was 22 I knew I needed to figure out a way to have some sort of career, and graphic design seemed like the right sort of balance between something creative and practical.

Gavin: You've worked for a number of companies over the years. What kind of work have you produced from them, and is there anything we'd recognize?

Stephanie: Let's see, most of the work for big companies has been internal type of stuff, business to business or trade show type of stuff. I have designed wallets for Harley Davidson, and ad work for Bad A$$ Coffee, Gold's Gym, tons of logo work, stuff for 3com, Cisco... too many to mention

Gavin: What's the process like for you from start to finish on an ad or product?

Stephanie: The process for an ad or logo or whatever is kind of the same process I use for my art, except when I do an ad or logo I have a specific end objective. I get the assignment, procrastinate and find anyway to shut off my brain, surf the web, take a walk, watch bad TV on the web, etc and then, I get that AHA! moment. I tell my clients, once I get the that moment, the jobs done, I just have to physically do it. When I am working on an art piece, it's the same thing, except I can just let things veer off course more.

Gavin: How did the idea come about to start doing prints?

Stephanie: When I was in Texas, I was working for a small leather accessories company, wallets, purses, that sort of thing. We were designing our trade show booth and wanted city scapes for a background. I wanted to make them look like comic books and that started it. I kept messing with the idea since then and was doing prints for my sister and friends. Last year, my sister got me to apply for the Utah Arts Festival, I figured " why the hell not, if I get in, I get in" I got in, had an “OH CRAP!” moment and had about 2 months to do a lot of prints.

Gavin: You chose to do landmarks from across the city. How do you decide which places to highlight?

Stephanie: It's all about what signs or buildings I think are cool or funny. And that's what I start at. I keep a camera with me now and sometimes it takes me forever to get anywhere because I keep stopping to take photos. And I get suggestions as well. And some nice people send me photos of places that have been torn down.

Gavin: Do you do them as a full screen printing or as a computer print, and why did you choose that route?

Stephanie: I do everything digitally. That's how this whole thing started. I want to eventually do actual screen prints of some of the images. The main reason I do them digitally is time and cost. I couldn't sell them for what I do if they were screen prints. And not to mention, digital it's a medium I work the most in.

Gavin: What was the reaction to them when they started getting shown around?

Stephanie: The reaction was kinda freaky. I did not expect it to be so positive. I did the Arts Festival thinking it would be okay and a new experience, but probably wouldn't lead anywhere. I didn't realize that these places were personal to other people. When I was at the Arts Festival, everyone had a story. Some of the motel ones were hilarious. Everyone had a Coachman's story.

Gavin: How did you come about to do the NYC and Omaha prints?

Stephanie: Well, I am from Omaha. When I was doing these for myself, that's the images I was doing. And New York, I visited a friend last year, and there are just some great architecture there. I want to eventually start going everywhere on a massive road trip and start doing other cities.

Gavin: Aside from the prints themselves, you also put them on cards and bags. Was that something you planned to do, or more of a decision you fell into?

Stephanie: As with most things that happen to me, a decision I fell into. They just seemed like natural mediums to continue with.

Gavin: Are you constantly adding to the collection, or are you doing them in sets of series?

Stephanie: I am always adding. I have about 100 other signs and buildings I have slotted to do. I seem to go in groups in my head. I have more bowling allies, bars and restaurants, I want to put in sets. And I have more out door stuff I want to do.

Gavin: A little local, what are your thoughts on our art scene, both good and bad?

Stephanie: I think the local art scene is good. I have seen some great stuff in the last couple of years. I wish it was more prominent, but maybe it's a good thing it's not. People are creating art they like, and maybe that can't happen if it's more spotlighted or I could be full of crap.

Gavin: Anything you believe could be done to make it bigger or better?

Stephanie: Just more attention, but the people who want to see more art find it. I do wish there were more smaller independent galleries around. 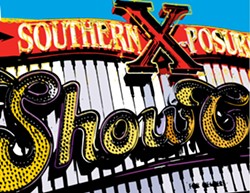 Gavin: How about what you think of Gallery Stroll and how its evolved over the years?

Stephanie: There's good and bad with it. I am not sure haw many people actually want to look at the art or just want a night out, but the fact that people are seeing art no matter the reason, it's a good thing.

Gavin: What can we expect from you the rest of this year?

Stephanie: More, more, more. I have applied to the Utah Arts Festival and some other art festivals in Utah and would like to do the Farmers Market again. I am going to try to get my prints in other places, and maybe do some shows. I have to force myself to be self promoting. That's not the most natural state for me to be in, but I am working on it.

Stephanie: I have prints at Signed & Numbered and cards at Cabin Fever, also the website, and I do custom work.