March 18, 2009
comment
Day 1 of South by Southwest's music portion kicked off with a series of day parties clustered around Austin's 6th Street vicinity: blocks and blocks of bars filled with promotional logos, bands, hipsters, tattoos and hair. So many beards. We headed to Maggie Mae's at noon, hoping for free food but came upon Orange County's Local Natives who proved to be an adequate substitute for savory bbq or Mexican snacks. The quintet showed off some impressive four-part harmony skills while the lead vocalist/percussionist/keyboardist lead the group in an upbeat round of songs with an underlying element of calypso pulsating throughout. Nice, but our stomachs still grumbled.

Next up, Radio Room for the Paste Magazine showcase. Inside we found not free but tasty treats: sweet potato Quesadillas and the promise of an appearance by Cincinnati bad-asses, the Heartless Bastards. Blood sugar levels in check, I left CW marketing ace Annie Quan and ventured off to the Austin pow-wow at Mowhawk for Here We Go Magic, acclaimed Brooklyn artist Luke Temple's solo project fully realized with four additional members filling out his analog home recordings. His drummer, grinning ear to ear, joined in on the five part harmonies, bringing to life the beautiful, reverb-soaked, synth and guitar layered "Fangela." 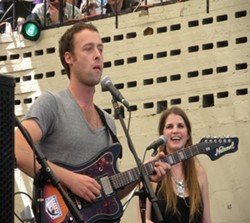 Some crappy band sent me packing for Radio Room for some Heartless Bastards. But first, a set by California's Port O'Brien who just arrived from their home base to wow an audience most of whom were already familiar with the alt-country/Americana group. Lead vocalist/guitarist Van Pierszalowski sounds like a cross between Tom Petty and Isaac Brock (Modest Mouse), feverishly relaying narratives that nod to his day job as a fisherman. After leading the crowd in a joyous shout-along they wrapped up and sent us out to the Heartless Bastards whose first appearance at 2009 set the bar incredibly high for pretty much every group hoping to make a mark in Austin. Erika Wennerstrom's voice is truly out of this world--a raw, tough and just a little bit lonely, each note sears with no-nonsense determination. Check out the group's recent release, The Mountain. Now.

Completely weak in the knee, I waddled over to Club de Ville for Bitch Magazine/Kill Rock Stars showcase to finally see Marnie Stern up close and personal. Backed by an amazing drummer who totally filled the very large shoes of her usual percussionist Zach Hill, plus an equally solid bassist, she played to a crowd of admirers who frequently made their affections known. "Look at all those beautiful people," one boy swooned as another pumped his fist along to Stern's signature guitar tapping style. The trio's chemistry was infectious. Not a frown in the house.

The Thermals closed out the afternoon session with their bouncy Portland indie-pop with one foot firmly planted in the 90s. Tonight: Dan Auerbach!! St. Vincent!! Others!!!