All hail the mighty Eagle Twin! The SLC duo tore the roof, or rather the awning off the tent at Emo's Annex on Friday night as part of Southern Lord's official SXSW showcase. Guitarist/singer Gentry Densley struck fear into the hearts of newcomers experiencing the heavy, heavy sounds for the first time though they neither flew nor fought in response, instead screaming their approval as he growled several lines beginning with "Begat." He turned that fairly innocuous Bible term into something truly wicked. Be sure to check out Eagle Twin when they return home, perhaps at Slowtrain for Record Store Day (April 18). 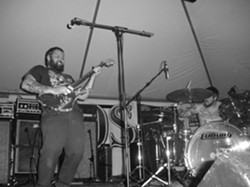 Earlier in the day, Waterloo Records hosted a few in-store performances including sets by Telepathe and Handsome Furs, both of whom put their electronic-fueled material to the live test with mixed results. Telepathe had some technical difficulties and seemed a bit green onstage, both artists getting flustered when their beats wouldn't do as they were told. The lackluster show might have had something to do with the lo-fi record store sound system. Or not. Handsome Furs did just fine. The Canadian couple of Dan Boeckner (Wolf Parade) and his partner in music/love Alexai Perry threw themselves into a pulsating tornado of songs off their latest release Face Control which isn't as cool and dark as their debut Plague Park but which delivers some major dance jams with sexy, sweaty overtones that might have easily been inspired by one of the married pair's hot and heavy makeout sessions.

Late in the evening, another two sexy performers took over Club de Ville: Sweden's Mapei and Philly's Amanda Blank whose street smart appeal is right up there with the likes of Peaches. Check out both ladies on a dance floor near you.