The Leave It to Cleavers (SCDG’s 2008 Champions) took an early lead over the Sisters of No Mercy, who wrestled it back more than once. Underdogs last year, the black-clad Sisters have stepped up their game Saturday with some excellent jamming/scoring by Nyda the Dead, Ashes to Ashes and Violence Vicksen, as well as impenetrable blocking by Beracooter.

The improved Sisters made the Cleavers work for it, but the housewives in red took the lead back in the second period—despite having most of their skaters in the penalty box at any given point in the bout. The Cleavers are heavy on jammers, and England’s Glory, China White, Lez Zeppelin and Dirty Pirate Hooker (new recruit Brutal Strudel was mysteriously absent) took full advantage with a scoring blitz in the homestretch.

Final score: Leave It to Cleavers 131, Sisters of No Mercy 107. The next Salt City Derby Girls bout goes down Saturday April 18 at the Salt Palace; tickets at SLCDerby.com and SmithsTix.com.

Leave It to Cleavers vs. Sisters of No Mercy bout pics from Saturday night, by Mark Alston: 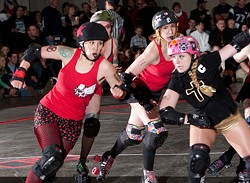 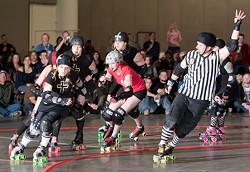 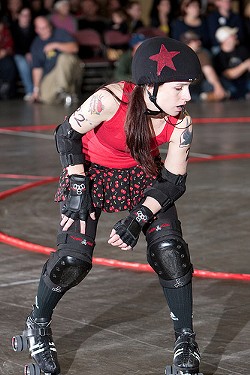 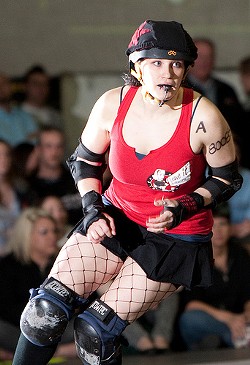 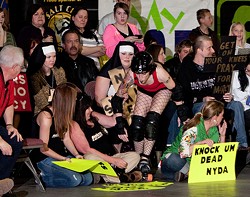 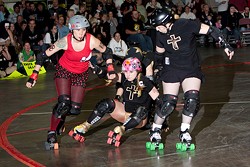