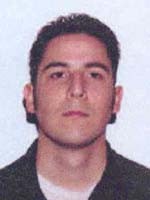 The FBI announced today their first ever domestic terror fugitive being placed on their terrorism wanted list. Daniel Andreas San Diego (pictured right) on the run since 2003 is considered an armed and dangerous, leftist terrorist, charged with the bombing of two San Francisco office buildings associated with a company that does animal testing. One bomb was packed with nails.

Say what you want about animal rights, but I happen to think explosives packed with nails are probably the wrong way to achieve your goals. And frankly make one seem like a bit of a psychopathic ass-hat, with a perhaps dangerous protein deficiency to the brain.

This kook is now on the same list of terrorists that planned every major terrorist attack against the U.S. and American soldiers and civilians from the Khobar Towers to 9/11.

Which says something doesn’t it?

Check out some of the winners on the FBI’s top ten most wanted and you see people like Glen Stewart Godwin, (pictured to the left) a drug trafficker who escaped out of both Folsom State Prison in California as well as a lock up in Guadalajara, Mexico, leaving a trail of bloody murders behind him in the process. His reward is $100,000 while the Vegan Terror, while thankfully not having caused injury or deaths, has a $250,000 information bounty on him.

Terrorists certainly deserve the bigger bulls-eye. If a criminal organization operates to exert political pressure through purposeful violence they need to be taken down. But are all terrorists worthy of sharing the same list?

Or does this “get tough” measure on a leftist extremist have anything to do with the fact that Homeland Security Chief Janet Napolitano has recently caught some shit for a report that suggested that military veterans could, in a poor economy, be vulnerable to recruitment by racist, right-wing extremists?

Like it or not we’ve now got domestic terrorists on the list. Let’s just hope they’re far and few between.