Thao Gets Down | Buzz Blog 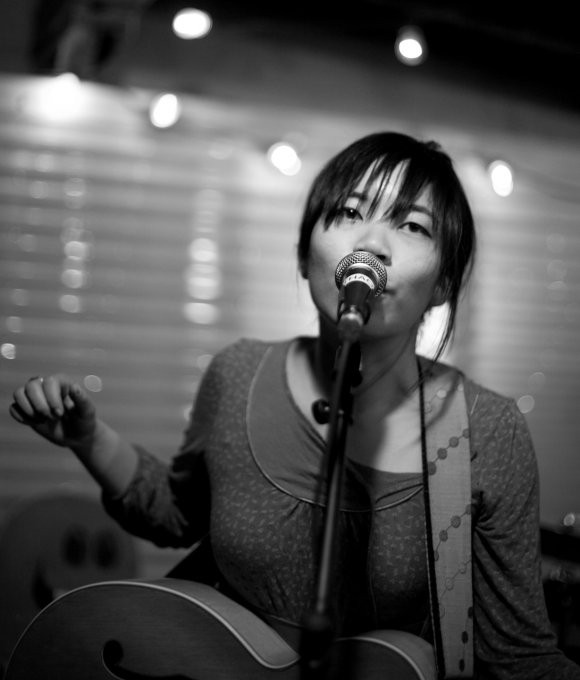 Thao Nguyen stopped in at Kilby Court Tuesday night for a one night only Cinco de Mayo performance, nestled comfortably between dates in Boise and Denver. Last heard 'round these parts during the Hotel Cafe tour in November, she’s been through a few times now on the strength of the perfectly repeatable We Brave Bee Stings And All, and, well, Tuesday served as a last hurrah of sorts. She’ll be back, but it’ll be a bit—don’t expect to see her again until the new album drops, late this year.

Still, in way of quasi-command performances then, she did it right.

For the uninitiated, there are a few things to count on when she and her band - Willis and Adam Thompson, who make up the Get Down Stay Down—show. In no order whatsoever then, here are a few of the standards that were on proud display at Kilby.

First off, Thao is fully committed to performing for her audience, whether you paid a ten spot to see her or you managed to slip onto a guest list someplace for free. Whether it’s the two-year-old dancetastic niece of her bassist (present) or the couple honorary kiddie percussionists helping on a song (helping to complete the feel of an all ages gig) or even the whole rest of the sing-a-longers, she won’t half-ass things. She just doesn't. You can count on her playing her guitar hard enough to break strings. She will give you all the voice she has to give. And she’ll use her trademark stomping cowboy boots as instruments, twin secret weapons that they are. There will be thrashing and sweating and smiling and writhing, all in the name of giving you a show, which is exactly why she so easily makes repeat customers out of anybody who sees her even once.

Thao’s songs are candy, too, they just are. They just taste all kinds of good in the ears. Hearing “Bag of Hammers” leads to your wanting to hear “Feet Asleep” and “Swimming Pools” and, well, that list goes on plenty long. She’ll even throw in new songs, too, and make you yearn for an early release.

She sure digs that surprise ending, too, the same kind that sounds like she’s gonna end her song quiet, only to amp things up again for another 30 seconds or more. She does that a whole lot, absolutely refusing to offer cookie cutter versions of the songs filling up her albums. This, along with the rest of those reasons that came before, is at that very heart of live music. This is what we want and crave and pine for, whether we know it at the time or not. Thao knows that already. Good thing.

Opening were Samantha Crain & The Midnight Shivers, along with Canadian act Sister Suvi. Samantha Crain, whether unleashing the surprising power of her vocals or playing her mouth harp or playing hard on the geet (or even all three), is one amazing musician in a tiny, unexpected package. As far as openers go, she simply won’t be doing it for very long. She and her band are plenty capable of handling the ship. Just give her time and watch some music history get made.