The Saturday, May 9 bout of the Salt City Derby Girls’ 2009 roller-derby season was a milestone for one team: The Sisters of No Mercy, who carved out their first victory in almost two years. The black-clad nuns dominated the green (in every sense; the team is mostly newbies this year) Bomber Babes 168-89 over two very physical half-hour periods. Sisters jammer Violence Vicksen scored first, and subsequent jams by Nyda the Dead and Beracooter solidified an wide lead over the Bombers. Even several impressive in-the-zone scoring runs by Bomber NOS (some of which saw her skating backwards and airborne) couldn’t make up the difference. By the half, the Sisters were leading 70-43.
Bomber Babes jammers Donkey Punch and Swine Flu (#H1N1, of course) made some serious attempts to catch NOS’ fire in the second half, and blocker Phatal Pheromone’s kamikaze hits sent several Sisters to their knees for more than a prayer. But it was the Sisters of No Mercy’s night, marking SCDG founder Brew Ha Ha’s second team win in her own league’s history, 168-89.

Next SCDG bout: A double-header with all four SCDG teams (the Bombers, the Sisters, the Death Dealers and the Leave It to Cleavers) playing in one night, at the on Saturday, June 6. Info: SLCDerby.com.

Roller derby this weekend: The O-Town Derby Dames play at the in , info: OTownDerbyDames.com; the Wasatch Roller Derby plays at Hollywood Connection in , info: WasatchRollerDerby.com. Both games Saturday, May 16 at 7 p.m. 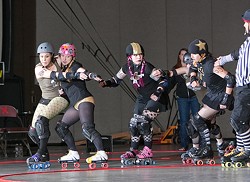