Tipica: not too typical | Buzz Blog

Tipica: not too typical

The SLC food community has been buzzing for months over the much-anticipated (and much delayed) opening of Tipica, a Tony and Matt Caputo restaurant project featuring the talented chef, Adam Kreisel. Billed as a "nose to tail" restaurant (Kreisel intends to use every part of an animal, not just specially-ordered cuts), Tipica was off and running this weekend with preview dinners for invited guests. I was lucky to be one of them.%uFFFD

After a brief introduction by Matt -- explaing the "nose to tail" concept and that Tipica's regional cuisine will be based on ingredients from Utah's sustainable (and organic, when possible), artisan farmers, cheesemakers, meat producers and so on -- we were off and running with an incendiary roasted mirasol pepper bisque and it's opposite: a soothing, chilled leek and celeriac bisque, which was followed by an absolute stunner: roasted cauliflower with balsamic glaze and micro licorice basil. Roasted cauliflower might not sound like much, but in Kreisel's hands, this became the most highly praised dish of the night. Explaining the technique behind the way he first sears the cauliflower to lock in flavor, Kreisel said, "I treat it like meat!"%uFFFD The Bethel Heights Chardonnay '06 alongside didn't hurt, either.

A scallop crudo with shaved fennel, braised purple kale and lobster vinaigrette didn't quite jell for me and many other dinner guests. It's a brilliant idea that demonstrates Kreisel's creativity and love of living on the culinary edge, but the overly rich and salty vinaigrette killed the scallops and the kale was a tad undercooked. But remember, the restaurant isn't even open yet and one of the reasons for these "test" dinners is to work out kinks in untested dishes like this one.%uFFFD 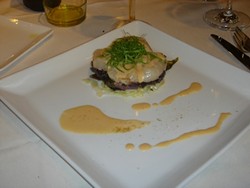 Spot-on was Kreisel's luscious lamb sweetbread and celery risotto made with Vialone Nano arborio rice and glazed celery and chive oil (this is a chef who loves his celery!). I loved this dish with "A" d'Aussieres Barons de Rothschild 2004.

Enjoying an after-dinner assortment of Chocolatier Blue truffles, I recorded an interview with the enthusiastic Kreisel and had hoped to have sound files here for you to listen to. But, alas, I screwed up the recording -- doh! My advise is to chat with him sometime yourself. I've never met a chef so articulate and passionate about what he does in the kitchen, and it comes through with flying colors on the plate.