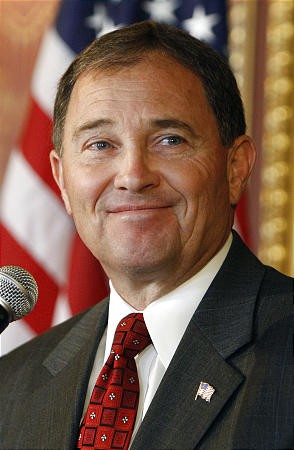 With Jon Huntsman bailing out of Utah to be the Obama’s administration’s ambassador to China, someone named Gary Herbert has been chosen to fill the gubernatorial seat.

Herbert is Utah’s Lt. Governor—news to many of us (including myself). Although this change in governorship seems benign, Huntsman and Herbert do have some key disagreements. Herbert, unlike Huntsman, does not support civil unions for gays. Also, it is questionable whether or not he will follow Huntsman’s example of taking action on climate change. I'd be amazed if he expanded Huntsman's reform Utah's alcohol laws.

Huntsman’s replacement by one who is not so moderate is disconcerting for many Utahans. If Herbert does not amend some of his current positions to more moderate one's, then he will probably not enjoy the high approval ratings enjoyed by Huntsman-- arguably a result of gaining favor with both Utah conservatives and liberals.