What Idiots Do for Fun | Buzz Blog

What Idiots Do for Fun 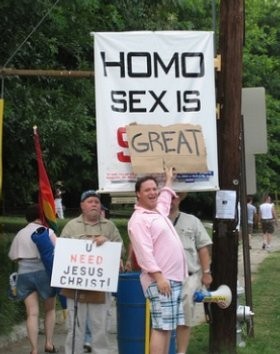 Someone with the name "Ruben Israel" (sounds made up) recently sent this, uh, "news tip":

Utah Pride is bias. My Name is Ruben Israel, one of the founders of Bible Believers Fellowship an active Christian group with chapters in over 52 cities nationwide. On April 25, 2009 I contacted the Utah Pride coordinator for the gay pride parade in Salt Lake City. I inquired any information, so our church group can walk the route at the parade on June 7, 2009. For we are a group that is proud of our sexual preference and being that this pride parade is filled with diversity we considered ourselves welcomed. Were we ever so wrong. For years we have stood on the sidewalk with signs on South State St & East South Temple, and have worked with the Salt Lake City police department. To date the Utah Pride coordinator Valerie A. Larabee has refused to reply to my emails requesting said information. Then on May 12, 2009 I received an email from Michael N. Westley (Media kknd Special Events Coordinator) that my application to participate was denied. No reason given. I am looking into getting legal counsel to possibly sue discrimination as I see this as nothing but hypocrisy with the gay community that loves to blanket itself with objective and fair. Is this not the same group that demands everyone accept them for who they are? Is this not the same group that cries discrimination, if not recognized? Is this not the same group that cries out against bigotry? Is this not the same community that will dictate their agenda as per Prop 8? Is this not the same people that demand tolerance? Yet this same ilk will not accept us for who we are? Is the gay community anti-free speech, what's next? Anti-religious freedom? Freedom of the press? This hypocrisy is a double standard, as they proclaim "DIVERSITY & INCLUSION" and give unequal protection at will. As men, we also love another man and His name is Jesus Christ and we are proud of our male and female sexuality. Ruben Israel (562) 619-7363 Bible Believers-Los Angeles irebukeu@earthlink.net

Uh, yeah, so basically the sad, angry, crazy pricks who wave signs and yell offensive epithets at the Pride Festival when everybody else is having fun think they're being discriminated against because they can't be in the Pride Parade.

Here's an idea for you, Ruben: You're the same cretins who protest LDS General Conference twice a year, aren't you? Why not ask the LDS Church to let you speak at the next general conference, and then sue their asses when they laugh in your face? They're probably just as, er, "bias" as those mean old gays who won't invite you to their party.

I have to say, though, I really am biased against fuckheads like Ruben. There is no reason to be tolerant of intolerance. These are the same people who yelled "child molesters!" at my partner and I a few years ago when we were in the parade. (Note to Ruben, et al: You might want to get glasses. We're in our 40s; neither of us looks even remotely underage.)

Thanks for the gift of laughter, Rube! Hope you have a happy Gay Pride Month all throughout June!