Made in Orem | Buzz Blog 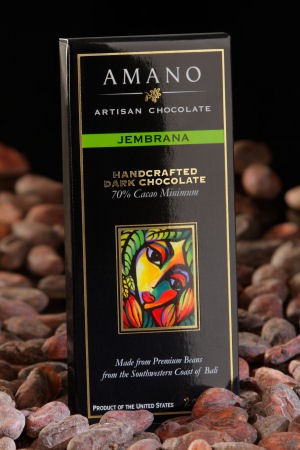 At the Best of State awards gala this past Saturday I met Clark Goble, who is Amano Chocolate founder Art Pollard's business partner. What? You say you've never heard of Amano? Read on.

We know that folks in Utah County are serious about sweets. But at the Orem-based Amano, chocolate love is taken to stratospheric heights. In Italian, a mano means "by hand." And at Amano, world-class artisan chocolates are hand-crafted with tender, loving care.

In business only since 2006, Amano has already garnered a trunkload of prestigious awards, including Best Dark Chocolate and Top Artisan Chocolatier at the San Francisco Chocolate Salon; gold, silver and bronze medals at London's Academy of Chocolate; and 1st Place for Dark Chocolate at the New York Food Festival.

If you'd like to give Amano chocolates a try, they are available at Tony Caputo's Market & Deli and at the Amano website.