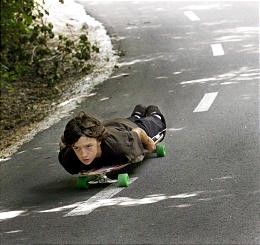 Two years ago, Provo city temporarily banned long-boarding in Provo Canyon. This was due to a number of incidents in which longboarders had collided into others or got in other serious accidents. The longboarders panicked, but fortunately a compromise was reached, and the ban was lifted.

But, once again, longboarders are in trouble. There has been more reported incidents involving longboarders, including four riding abreast down the trail and collisions in which people were hurt. As a result, the county has threatened to send deputies up the canyon to crack down on longboarders if they can’t “police themselves.” If that doesn’t work, it will be banned completely.

Well, at least this time they didn’t jump the gun straight to banning. No doubt many of the longboarders are irresponsible on the Provo Canyon Trail. It’s probably the same guys who longboard and weave their way through people in the halls at UVU (come on, I’m walkin’ here!). But I wonder if longboarders are bearing too much of the blame for trail misuse.