First, the Sisters of No Mercy took on the Death Dealers in a tight, defensive bout that allowed for little scoring but a whole lotta hitting; Sister Beracooter was easily this bout’s MVP, delivering some of the speediest jams and most brutal knockdowns of the evening. The Dealers led for the most of the bout, but the Sisters pulled head in the final quarter to claim an upset victory. Final score: Sisters of No Mercy 80, Death Dealers 61.

In the night’s second bout, the Bomber Babes (still made up of mostly rookies and substitute players) faced off against 2008 SCDG Champions Leave It to Cleavers in a more decisive game. Bomber vet NOS’ always-impressive scoring runs were no match for the Cleavers’ triple-threat of England’s Glory, Scarlicious and China White, who jacked the points up early on and didn’t let up. Final score: Leave It to Cleavers 130, Bomber Babes 71. 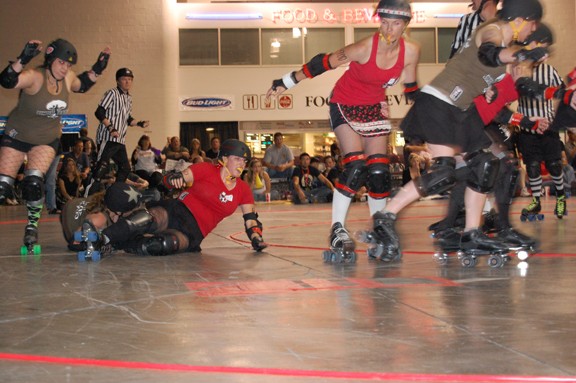