Junction City's Killa Patra started the game off on a high point receiving 4 points in the first jam. The IEDDivas picked it up and barreled towards a consistent 20 point lead for the first half. Rage-N-Red ended up going down just 5 minutes before the end of the first half. After knocking an IEDD blocker down, she took a fall dislocating her knee. Hannah Bull, fearful it was worse for Red, announced to IEDD that the rest of the game was for Rage-N-Red.

Second half started strong; Slayer Cake, Colonel Skirts, Killa Patra, Sarin Gasp! and Miss take all managed to get 4 point jams quickly, clearing the lead IEDD had acrued. Sarin Gasp! ended up going down in the middle of the second half, getting hit in the back of the neck was out for the rest of the game.

JCRD blockers didn't let IEDD forget Rage-N-Red's pain. Stryker Dawn and Hannah Bull pivoting their blocker's on the track to keep IEDD's jammer behind, and clearing the way for the JCRD jammers. Ms. R. SeNic and Purple Haze teaming up to take several of the IEDD girls down at a time, and Crimson Tide, Everest Queen, and Demon Darlin' all taking IEDD players down showed JCRD wasn't giving up.

New to JCRD this season, Le Tigre managed to brake through many of the IEDD blocker walls, and also jammed for JCRD. Being as tough of a fight as the second half was, IEDD won with 175 points, and JCRD finished with 108 points. 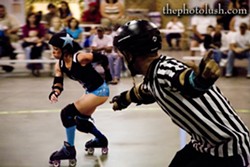