June 11, 2009
comment
Obama had strong words about health care reform in Green Bay Wisconsin today."What's the alternative?”, the president asked, in regard to his proposed health care solution, which would include a public option. "I know there are some who believe that reform is too expensive, but I can assure you that doing nothing will cost us far more in the coming years.” 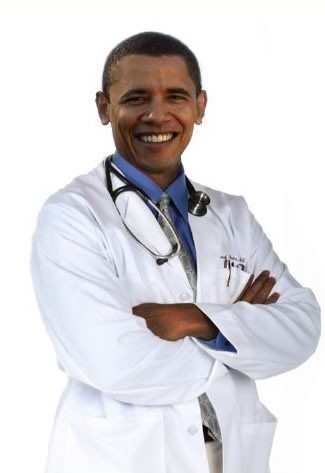 His town hall-like meeting also attracted a number of protesters, who waived signs that read “No Socialism,” “Taxed Enough Yet?”, and the like. Could these be the same folks who gave a half-assed effort at reenacting the Boston Tea Party?

Either way, Obama's health care plan isn't socialism. Not that that matters to those who adhere to the rants of Glen Beck, though. Socialism has become a murdered word, with its true meaning lost in the delight of those that tear it apart to prove an unrelated point. Keeping it simple, socialism means public ownership over the production of goods. A public option in health care does not mean equate to this. The free-market would still have free reign, as it does in countries like Japan and Germany, who have amazing universal health care coverage. The result is then a subtle form of capitalism, with private entities getting paid the necessary bills from public money. This benefits the public because the overwhelming cost of health care is distributed across the board. Win-win.

For those opposed to the public option, I'm sure they have detailed reasons as to why. Yet, for most, their reasons would quickly go out the window if they experienced a loved one who either remains ill or passes away because they could not afford health care coverage. Or, even worse, if insurance companies refused to cover them because of pre-existing conditions. For the very wealthy, this does dilemma does not surface. Naturally, the conservatively inclined wealthy oppose the public option.

Opposition still continues with the A.M.A. (American Medical Association), who, besides having a fancy organization title, “do not believe that creating a public health insurance option for non-disabled individuals under age 65 is the best way to expand health insurance coverage and lower costs. The introduction of a new public plan threatens to restrict patient choice by driving out private insurers, which currently provide coverage for nearly 70 percent of Americans.”

These threats which are supposed to lead us to believe that the public option will be disastrous are specious. Private insurers will still have a place. Besides that, the A.M.A. Is a suspicious group of physicians that has a history of opposing anything that might put a dent in Doctor's wallet's, whether real of perceived. They campaigned against Medicare in the 1950s and 1960s, joining in on Operation Coffee Cup, backed by Ronald Reagan. The A.M.A. helped defeat Bill Clinton's proposed health care reform. Also, they frequently campaign to raise medicare payments to physicians.

Not that there is anything wrong with doctor's having advocates. But every other industrialized nation has a universal health care system, and they still have doctors. The doctors there still make a lot of money. Maybe a little less, but enough to buy BMW or a Benz still. Health care reform in the United States could not be as catastrophic as the A.M.A. would have us believe.