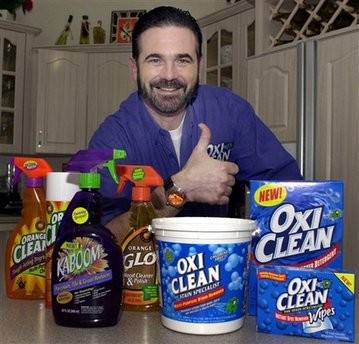 Aww. Even though he was straight, I think he deserves to be classified as an honorary bear. He brightened up our evening television viewing. Cute, hunky, enthusiastic, bearded TV pitchman Billy Mays was found dead at his Florida home Sunday morning after sustaining a head injury during a rough airplane flight.

So, "Silly Me" became his nickname around our house. We bought a two-month supply of orange-scented Oxi-Clean and, although we were never sure it actually made any appreciable difference, during that period we faithfully added a scoop to every load of laundry. As Mays said, "It makes your whites whiter! It makes your brights brighter!" (And, as I always added, "It makes your tights tighter!" This mildly dirty joke always brought a snigger.)

So, Billy Mays, may you brighten the universe wherever you are. Even as a shill for a chemical manufacturer, you had an impact on our lives, and our world has been a little better because of you.