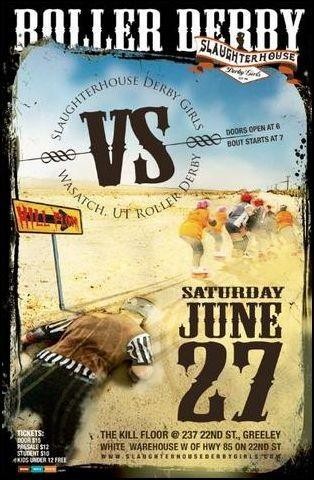 Wasatch Roller Derby (WRD) won their first interleague bout this weekend in . The Slaughterhouse Derby Girls (SDG) hosted WRD Saturday, June 27, at the Kill Floor. Secondary to injuries and travel conflicts, WRD brought a roster of only 9 skaters to this bout along with officials and a few diehard fans.

Wasatch gained momentum early on in the bout, with Queen Anne’s Revenge scoring 5 points her first jam. Other jammers for WRD included Honey Delunatic and Psychedelic Lilia who were also able to score points and gain lead jammer status most jams of the bout. With so few people on the roster, WRD proved their endurance with most skaters actively playing the entire bout. Slaughterhouse came out with a strong and cohesive strategy from the beginning, controlling the back of the pack most of the game. They matched WRD jam for jam until the end of the first period with WRD leading by only 6 points (37 to 31).

Wasatch re-grouped at half time, deciding to change their strategy slightly by utilizing both Queen Anne’s Revenge and Honey Delunatic as alternating jammers until a substantial lead was accomplished. Not halfway through the second period, WRD lead Slaughterhouse by up to 40 points. Slaughterhouse fought back giving both our blockers and jammers a run for their money. One of Slaughterhouse’s skaters injured her knee during a particularly aggressive jam ending her game early. Many hits by both teams sent skaters into the crowd, penalty box, or into the referees. Slaughterhouse increased their aggression by hitting jammers straight off the line and out of bounds preventing their ability to get lead jammer status at any point during the jam. Despite all of the challenges, WRD was able to hold their lead by 10-20 points during the entire second half. Slaughterhouse never gave up and rallied during the last jam of the bout.

Queen Anne’s Revenge was the jammer for WRD in the final jam of the night. Slaughterhouse brought their A-game to this jam and hit her to the inside track on her first pass. Queen Anne was hit out of bounds and cut track past the last blocker in the pack resulting in a 1-minute major penalty. This left Slaughterhouse with the only jammer and the opportunity to gain the 30 points needed to win the bout. The home crowd for Slaughterhouse erupted in cheers as soon as Queen Anne was sent to the box. The blockers for WRD stepped up their game sending both Honey Delunatic and Dr. Pain to the box as well, leaving only 2 blockers from WRD able to defend the lead. Luckily, Gunnin’ Geisha and Miss Bizness Das did their best and, in the end, Slaughterhouse was unable to gain enough points to steal the win from WRD. It was a very exciting last jam. Final score: WRD 129, Slaughterhouse 114.

Wasatch Roller Derby’s next bout is Saturday, July 25, 2 pm at in The league is bouting for Friends of Animals and will have BBQ and beer along with the exciting sport of roller derby. Go to WasatchRollerDerby.com for more information and tickets.