When local country/roots-rockers Bronco signed up to play the Brown Bag Concert Series they probably didn't expect to field song requests from members of a controversial polygamous sect.---

Shortly after noon today, the SLC band set up outside downtown's City and County Building to perform for the usual lunchtime crowd - plus hundreds of FLDS men, women and children gathered in opposition to the proposed sale of farmland that under the United Effort Plan Trust is ostensibly protected from property seizures during crackdowns on polygamy.

Dressed in their usual pioneer-era garb - shapeless dresses in various solid colors for women; dungarees and dress shirts for men - the FLDS protesters gathered across the street from the Matheson Courthouse holding signs alleging constitutional violations and lies.

"Fear of God and long black hearses," Bronco's Tyler Anderson sang while a group of young FLDS men watched from beneath a nearby tree, scowling through the killer set of homegrown twang. 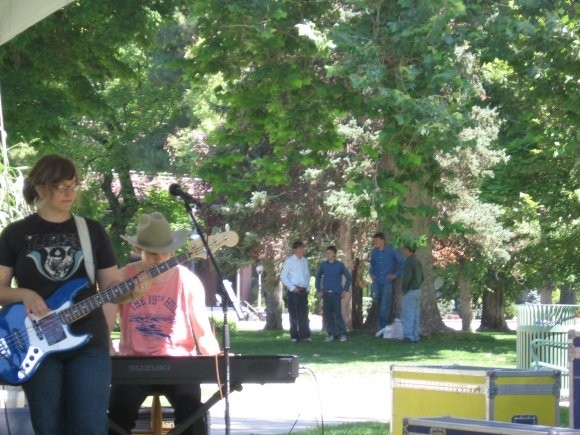 Others walked past the stage, casually, as if it weren't at all strange to see their anachronistic wardrobes juxtaposed with upscale business folk, tattooed onlookers and intoxicated homeless people camped out on the lawn. 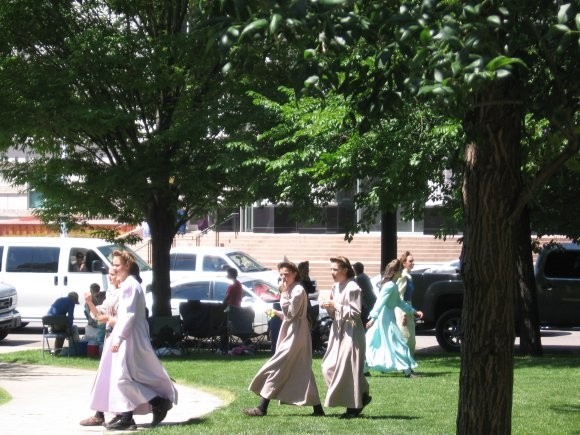 Younger children, intrigued by the live music, approached the players and stood rapt with attention until an adult inevitably dragged them away. From the audience's perspective, it seemed that at any second one of the FLDS passerby might pull the plug on the whole affair.

Turns out they just wanted to hear something familiar. Toward the end of Bronco's set, one FLDS woman approached the soundman with her iPod - yes! her iPod! I thought technology was frowned upon at the compound. Or is that the Amish? - and once the set wrapped a recording of some man speaking over children eerily singing blared from the Brown Bag tent. Everyone gathered their things and exchanged surprised looks before leaving the FLDS to await the judge's ruling.

Hands down the strangest show I've ever attended.