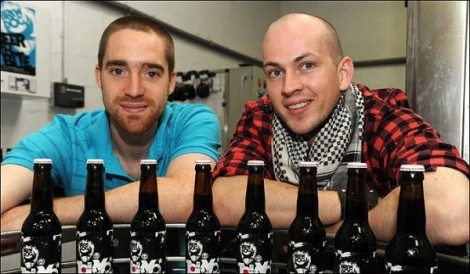 Here in Utah, much of the locally brewed beer we drink logs in at around 3% alcohol. --- There are exceptions, such as Squatters' full-strength IPA and Uinta's XIV Anniversary Barley Wine. But still, these beers -- and in fact, every other beer on the planet -- are wimpy compared to Tokyo beer from Scotland.

BrewDog, located in Fraserburgh, Aberdeenshire, has brewed the world's most potent beer. Brewers James Watt and Martin Dickie recently created Tokyo, a beer weighing in at 18.2% alcohol. That's 4-5% higher in alcohol than most wines, and means that one pint of Tokyo would contain the equivalent alcohol as a typical bottle of wine.

Ironically, Tokyo's creators claim that their beer will actually help to prevent binge drinking, saying "It's so potent, punters will down less of it." Hmmmm ... interesting hypothesis. "Our hardcore beers are loaded with flavor, bite and body, so you drink less of them," says James Watt. "Industrially-brewed lagers are so bland and tasteless that you're seduced into drinking a lot of them." Makes sense to me, sort of.

I doubt I'll be able to get my hands on a bottle of Tokyo to taste. But if I do, you'll hear about it here. Until then, I'm happy with Uinta's new XIV Anniversary Barley Wine, which is very, very tasty at a mere 9.8% alcohol.