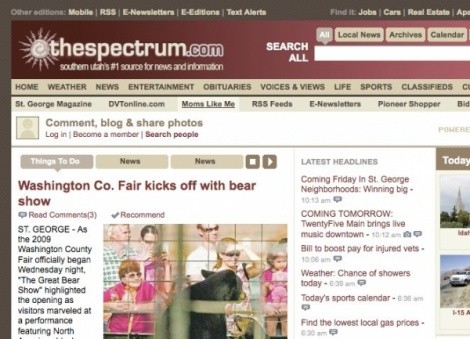 According to GLAADblogger, The Spectrum recently turned down the wedding announcement of a gay couple who legally married in California during that short window in which same-sex couples could marry there.  Remember the Cali Supreme Court's decision: the existing gay marriages are legal and recognized.

So it's sad to GLAAD that the Spectrum turned down the wedding announcement because “As our policy is to run marriage announcements recognized by Utah Law, I have made the decision to not run this announcement.”

"72 percent of all daily newspapers in the United States now accept wedding and/or commitment ceremony announcements for same-sex couples," according to research by GLAAD. Utah newspapers that have (and presumably will continue) to print gay marraige announcements, according to GLAAD, include the Salt Lake Tribune and The Logan Herald Journal (on a case-by-case basis).

The (Ogden) Standard-Examiner, which has not been asked to print one before, operations editor Kim Perrin said when I called her, but they would almost surely be willing to do so. "I've never been told to deny one," Perrin said. "We would probably run it."

The (Park City) Park Record publisher Andy Bernhard said they also have never been asked to print a same-sex marriage announcement. Bernhard said, in absence of a policy, he would have to discuss this issue with his editor, who is out of town. He said they almost surely would print the announcement; the debate, he said, if any, would be "whether it would be considered a wedding announcement or a civil union announcement...We're fairly liberal."

It's his "understanding" that the newspaper owned by the Church of Jesus Christ of Ladder-day Saints, The Deseret News, doesn't print any marriage announcements at all, GLAAD's Adam Bass told me in an e-mail.

Also absent on GLAAD's list is City Weekly!  We don't publish wedding announcements at all, but this one we will.

Tyler Jerome Barrick and Spencer Kent Jones will celebrate their marriage in a ceremony on September 6, 2009, at the Rio Villa Resort on the banks of the Russian River in Sonoma County, California.  An open house and reception will be held in their honor on August 22, 2009, at 7PM, at 908 Madison Heights in Washington, Utah.

Spencer is the son of Leon and Cherie Jones, currently of Stansbury Park, Utah, and formerly of St. George, Utah.  Tyler is the son of Steven and Linda Stay of Washington, Utah.

The grooms met in St. George, Utah, in 2001, while Spencer was home on winter break from Dartmouth College and Tyler was attending Dixie State College.  The couple has subsequently lived together in Washington, DC, Tokyo, Japan, and San Francisco, California.  Spencer graduated with a B.A. in government and history from Dartmouth in 2002, subsequently obtained a Juris Doctorate from Stanford Law School in 2007, and currently works as a litigation associate for the international law firm of O’Melveny & Myers LLP in San Francisco.  Tyler graduated with a B.S. in nursing from the University of San Francisco in 2007, and he currently works as a cardiac R.N. at the UCSF Medical Center in San Francisco.  Tyler and Spencer were among the first dozen same-sex couples to legally obtain their marriage license in San Francisco last year, on June 17, 2008.  The couple has made their home in San Francisco, where they reside with their dog Cooper.