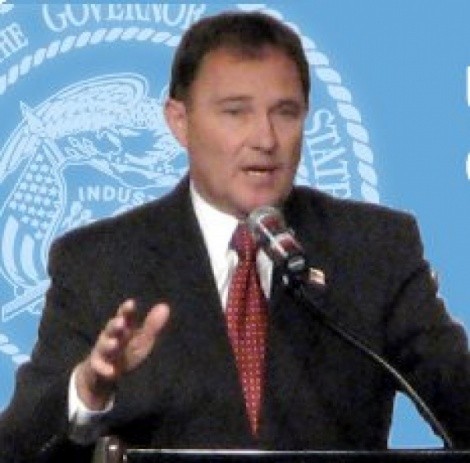 It's too bad I need to tell you this, Governor Herbert, but even though you are white, Christian and heterosexual you, too, have a race, religion and sexual preference.

Thus, you are the beneficiary of these so-called "special rights" conferred by anti-bias laws, as is everyone else.

I mention this, guv'na, because at your first press conference Thursday you made the following statement regarding Salt Lake City's effort to pass an anti-discrimination ordinance that would include sexual preference as a protected class:

Where do you stop? That's the problem going down the slippery road, pretty soon we're going to have a special law for blue-eyed blondes...or for people who are loosing their hair a little bit. [emphasis mine]

What do you mean by "pretty soon"? Hey, Gary, blue-eyed blondes are protected already. Caucasian is a race. It almost seems like you didn't know that. If someone is fired for no other reason than his or her white race, state and federal law already protect them.

For proof that "normal" white, Christian, heterosexual people are protected by anti-bias laws, refer to the FBI's annual hate crimes report. You'll see that, after anti-black motivation, anti-white hate crimes are the second most common race-based hate crimes in America. That list shows that heterosexuals and Christians are also victims of hate crimes.

Now, look, there's always the "slip of the tongue" defense anytime someone says something stupid, but I'm not gonna let you off that hook this time for the following reason: you are the governor and you should know better. You are not allowed to be so unthoughtful and you didn't accidentally say "blue eyed blonds" in place of "fans of Sarah Palin" or anything else. Your comment reveals a deep misunderstanding of an important issue which, I suspect, belies your hesitance to analyze this issue intellectually.

A final note: when you can show me hate-based violent crimes, housing or work-place discrimination committed against people who are loosing their hair, then we can talk about including "the bald" as a protected class. You take each class, one at a time, on its merits, and determine whether it justifies a "special" protection. If crimes against bald people were regularly leaving an indelible impression on other bald people that they will be the targets of violent crimes, or if bald people were regularly being denied housing or work simply because they are bald, then many people would favor including them in hate crimes and other anti-bias laws.