Ogden’s Junction City Roller Dolls played their second expo bout of the season Saturday at Layton’s Davis Conference Center, with the theme of “Cops vs. Robbers.” Sure, they were wearing the same uniforms as their April season-opener, “Blue vs. Black,” but the theme was different. ---

So was the JCRD: Having obviously worked on their game, and recruiting several skaters for Ogden’s O-Town Derby Dames league, Junction City as a whole has improved markedly over five months. At least on the track; in bout themes, not so much.

The score went back-and-forth between the Cops (in blue) and the Robbers (black) in nearly every jam of the first period, with no decisive lead. Jammers Colonel Skirts (Cops) and Killa Patra (Robbers) were an even match for points, with Robber Harry Slaughter making for an impressive new wildcard in the mix.

Toward the end of Period 1, Robber Madam Decaye went down hard; game play was halted for almost 15 minutes while paramedics arrived and hauled her out on a stretcher. Score at the half: Cops 60, Robbers 57.

Points see-sawed in the second half, as well--at least initially. As the skaters began playing less strategically and more viscerally, the Cops eventually pulled ahead by 20 points and held that lead until the end. Final score: Cops 133, Robbers 114.

The Junction City Roller Dolls’ next bout will be against SLC’s own Salt City Derby Girls at Golden Spike Event Center in Ogden on Saturday, Sept 12. Tickets and info: SLCDerby.com and JunctionCityRollerDolls.com. 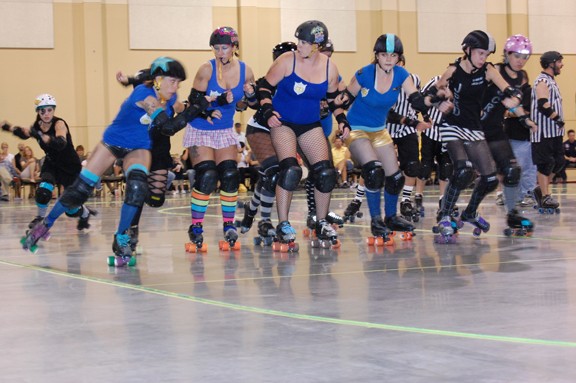