I Hope They Serve Beer In Hell: The Tour | Buzz Blog

I Hope They Serve Beer In Hell: The Tour

In August, Salt Lake City’s Robin Brown was invited along on the opening Portland/Seattle portion of the world-premiere tour for blogger/author/proud asshole Tucker Max’s indie-flick I Hope They Serve Beer In Hell, based on his book of the same name. --- For the uninitiated, Tucker Max first gained infamy through his blog, TuckerMax.com, wherein he details his drunken and often humiliating (for all parties) sexual encounters with numerous women. From this came the book, and now the movie (an independent release to avoid a major studio screwing with his “vision”), which opens Sept. 25—you may have seen the trailer in front of Mike Judge’s Extract last weekend. This is Robin's tale:

It all started when a friend of mine, Bill Dawes (he's on the left below; I'm on the right), a stand-up comedian who has a small part in the movie, invited me to Portland for the premiere screening. I arrived in Portland the afternoon of the premiere and met up with the guys at the hotel. I had time enough to

change then it was lobby call and time to head to the theater. I had never read the book, and had no idea what to expect of the film. Within an hour of our arrival, people were pouring into the venue to fill the entire five-screen theater.

I settled into my seat with a gin & tonic—the first of many for the night—as Bill came in to introduce the movie. The lights went down and the movie started off with a bang! In the opening scene, Tucker Max’s character has a women bent over the kitchen counter and is just banging the hell out of her when the cops bust in due to a noise complaint from a neighbor. With guns drawn, they’re shouting at both to put their hands in the air, the women (who turns out to be deaf) tries to explain to the police that there is nothing illegal going on, and yells in deaf-speak at the officers that she was about to cum and they’ve ruined her orgasm!

The movie goes on to introduce Tucker and his two college friends. One is a jilted sexist type who has a deep hatred of women since walking in on his girlfriend deep-throating another man. The other is a sensible, decent guy who’s about to get married. Tucker decides that a bachelor party is in order and the guys head out for a night of complete debauchery. Rounds and rounds and rounds of drinks lead to them pissing off just about every woman in sight—but they don’t care; they’re on a mission! Seedy strip clubs, bar fights, arrests, sex, sex, sex and a midget made this movie one the most hilarious I’ve seen, not to mention the funniest shit scene I’ve ever had the nauseating pleasure of enduring!

And the party doesn’t stop there. By 11 the next morning, we’re in the van and heading to Seattle for night No. 2. I was so hungover from the night before that I felt like I had to throw up for the entire three-hour drive. We arrive to find the place wasn’t open yet, so we took a walk around. As we start up the street, three guys recognize Tucker and dash across the street to talk to him. Fans start to flock and Tucker ducked into a pub to wait out the crowd before the screening started.

I went into the venue to help set up all the merchandise, mics and whatever else needed to be done, when I came out 20 minutes later there were people lined up around the block for the sold-out show (above, right). The energy was high and the people were anxious—Tucker Max fans are crazy and ready to party! Once the theater was full, Bill and Nils Parker (co-screenplay writer and producer) start to introduce the film. Tucker was out of sight, but miced up in the back of the place—he starts talking over the PA and the crowd goes nuts! As he makes his way to the front the crowd roared with applause and screams for their idol.

The screening went off without a hitch, which brings me to the after-party held at a bar next door to the theater. I had been there ahead of time, where I was involved in a very heated game of beer pong when the people started pouring in. We danced, drank and insulted our way through the evening, and I’m pretty sure I made out with three different women—being a women myself, this was more than acceptable to guys I had been spending the last two days with. 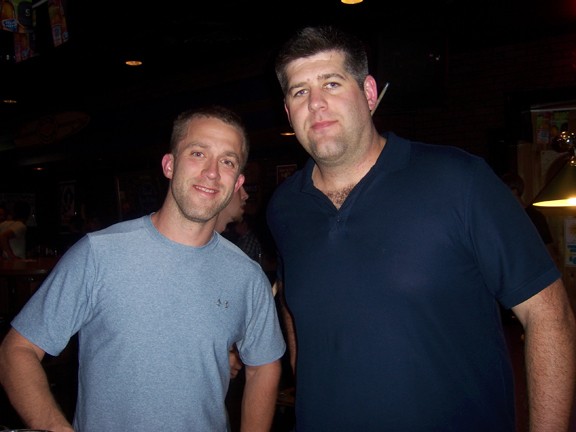 Tucker was, needless to say, tuckered out and ready to go; poor guy had to wait for all of us heathens to get to the van. When I found my way out, we were one man short: Nils (the big guy on the right; Tucker on the left). As we are waiting in the van out front of the club this horrible banshee-vampire woman starts banging on Tucker’s window. She wants him to get out and take a picture with her, but given the appearance and toxicity of this woman, he’s reluctant. He tries to lock his door but she yanks it open! First she tries to jump in on top of him, then she tries to pull him out! He shoves her away then she comes back swingin’! She punches him in the face about three times before he pushes her far enough away to shut and lock his door and screams “drive!”

As we are pulling away, Nils comes running out of the bar. “Don't you fucking stop for that bastard!” yells Tucker. We swing the side-door open as Nils, running along side the van, jumps in. Silence ensues for about a minute, and then Tucker starts losing it. Screaming at everyone for everything! He and Nils (who is Tucker’s best friend) get into a junior lover’s spat until Nils ends it by yelling at Tucker to “shut the fuck up!” We sit in silence the rest of the way back to the hotel. And I mean silence; no one says a fucking word.

The next morning, we all parted ways for our flights home. I want to say thank you to all of the guys, Tucker, Nils, Dave, Bill, Jeff, Ryan, Chris, Ben and Charlie, for making those two days I’ll never forget! I Hope They Serve Beer In Hell opens nationwide Sept. 25—go see it!