Ogden’s Junction City Roller Dolls obviously spent the five months since their early-season bout against Salt Lake’s Salt City Derby Girls practicing and working on (it’s now a semi-official roller-derby term) “strategery.” ---Back in May, the SCDG handily beat the JCRD 203-46 at the Salt Palace; Saturday, Sept. 12 at Ogden’s Golden Spike Event Center, the JCRD put up a more convincing fight--they still lost, just not by as much.

First off, note to the idiot with the megaphone at the end of the track who didn’t shut up for the entire bout: Your garbled “play-by-play” added nothing the proceedings, just annoyed the shit out of anyone within 10 feet. Leave it to the professionals, dumbass.

Back to the game: The ladies began hitting hard from the first whistle; the JCRD Trainwrecks (in black & blue) sought to counter the SCDG Shakers’ (in yellow) jamming/scoring strength with blocking clusters and sheer force. But Shakers England’s Glory, NOS and Roller Her Kitty still managed to cut through the packs like bullets (hey, it's Ogden) and ratchet up an early point-lead that held for the remainder of the bout. Not that the Trainwrecks were only about defense: Jammers Colonel Skirts, Killa Patra and Slick Tease poured on the speed for several impressive, if not point-balancing, runs.

The JCRD rallied and roared back strong in Round 2, seemingly catching SCDG by surprise and (somewhat) closing the point gap. Unfortunately, the one-two blow of Colonel Skirts going down and having the wind knocked out of her in a particularly brutal mash-up, and Shakers scoring machine NOS pulling out four “Hot Tricks” (five points per pack pass) in a single jam dashed any faint hope of Ogden catching up. 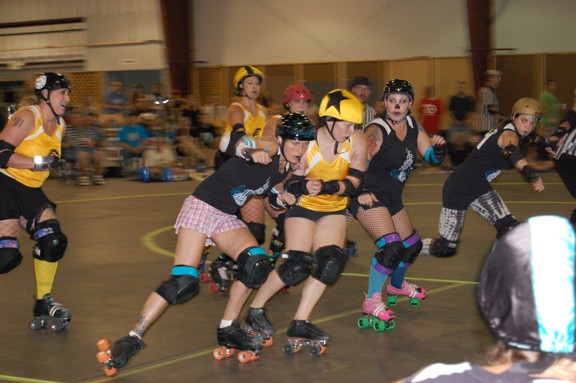