The mother of one of the children DJ Bell is accused of kidnapping testified this morning she never saw Bell enter the home and remove the children, but prosecutors made the case that the kids, ages 2 and 4, could not have left the home without an adult's help to open locked doors.---

Facts both sides agree on are that on July 3, the two children plus seven others were sleeping in the home next door to Bell's home in South Salt Lake with their parents and other adults partying in the driveway. Bell went over to the party about 1 a.m. and left at about 6 a.m. as the sun was coming up.

Soon after, Tapululu Latu, the mother of the 2 year old, noticed the two missing children, went over to Bell's house and found them there.

Latu testified today that before she entered Bell's bedroom she heard him say, ""You kids are beautiful. I want to be sure you're OK." She says she burst into the room, saw Dan Fair, DJ's partner, on the bed, had an altercation with DJ in which she slapped him, and left the room, saying "he should lock his doors because when I walk out with my kids I don't know what my family will do." 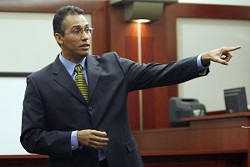 Prosecutors' admitted in their opening statements that the fathers of the two children in question have criminal records. Bell, and his partner, Dan Fair were later attacked that night, but no charges have been filed related to the assaults.

Prosecutors say they will play a taped police interview with Bell made the night of the alleged kidnapping and attack, in which Bell says "I took the children. I shouldn't have taken them."

But defense attorneya argue that Bell's head injury that resulted from the attack lead to his false statement. They plan to prove that his statement makes no sense at all. They also say this is a case of child neglect, no kidnapping.

Defense attorney Susanne Gustin argued in her opening statement that Latu "had a motive to lie. She manufactured a kidnapping to avoid her family being arrested that night."

Prosecutors will continue their case after lunch.  Latu was under cross-examination for about 20 minutes before the break and the case will resume there.

Protesters were again camped outside the 3rd District Matheson Courthouse Tuesday prior to the trial beginning. Bell and Fair's supporters have alleged the attack was a hate crime that was never charged and also believe Bell is fully innocent.