When the opportunity comes to work on a major television show, you'd think that might be the highlight to a writers career. If not for the fact that you wonder if the chance will ever come around again, then for the idea that your name is forever tagged to that one project. But for one local comic book writer that was simply the start.

--- Jake Black got his start working on the CW show “Smallville” and has been building his writing career from there with some of the more endearing and traveled titles currently in production. But that's simply not all to this story. Recently Jake was diagnosed with Hodgkin's Disease, and while battling the cancer his peers and colleagues collected a fund to help him out so he could continue to do what he loves. I got the chance to chat with Jake about his career and recent trials, along with thoughts on comics in general. And check out photos from the benefit held at Dragon's Keep in Provo over at this gallery.

Gavin: Hey Jake. First off, tell us a little about yourself.

Jake: I grew up in Orem, and now live in Eagle Mountain. I'm married, and have a toddler son running around the house.

Gavin: How did you first take an interest in comics, and what were some of your favorite titles growing up?

Jake: My first exposure to comic was through "Super Friends" on weekday mornings. It made me fall in love with superheroes. I first started reading Archie comics when I was 8 or 9, and then mostly read Star Trek comics until I was in my teens at which point I latched on to superhero comics.

Gavin: What made you decide to head to BYU for college, and what was your time there like?

Jake: There were a lot of factors--including scholarship money, growing up in Orem, and more. I had a positive experience there.

Gavin: What was the first break for you getting into writing comics?

Jake: I started as the writer's intern on the TV show “Smallville.” Shortly after I finished my internship, DC announced that they wanted to do a series of comics based on the show. I was excited about that, and asked my friends/colleagues at the show if I could work on one of those issues. The main writer on the series let me co-write a short story with him that appeared in Smallville #5.

Gavin: How did you land the gig with TMNT, and how has it been for you being a part of its development in recent years?

Jake: Once that first Smallville issue came out, I sent copies of it to every publisher I could find. Mirage, the TMNT folks, were really the only ones that replied. I was never really a big Ninja Turtles fan, but started pitching some stories to the publisher. I did a lot of research to get caught up on the comics version of the Turtles, which is quite different than the animated ones. As I build a relationship with those guys, I continued to get work with them and have had a terrific time in Turtleland.

Gavin: You have a number of titles to your name like Ender's Game and Legion Of Super-Heroes. What's been the best title for you to work on and why?

Jake: I don't really have a favorite. I enjoy most of what I work on. I like the Bizarro Halloween story that's coming out at the end of October from DC Comics a lot, but I really just enjoy the medium and telling stories in comics, no matter what they may be.

Gavin: You also got involved with the show “Smallville.” How did that opportunity come about?

Jake: As the show premiered I was looking for an internship. Having been a Superman fan since the Super Friends days, I thought I'd see if I could get an internship with that show. This was in the earlier days of the internet, and finding the right people to talk to was a little challenging, but I tracked them down, and ended up getting on the show as the writer's intern halfway through season one.

Gavin: Recently you were diagnosed with Hodgkin's Disease. When and how did you find out?

Jake: Just over a year ago, I developed a lump by neck. Doctors were a little concerned, but took more of a "let's watch it" approach. In March of this year, I found a second lump, at which point we ran several tests, and started surgeries, and chemotherapy.

Gavin: What has it been like for you both for work and at home now living with the cancer?

Jake: I've been really fortunate that I can work my own schedule. I can rest when I need to. I can work around the cancer.

Gavin: Recently a number of artists and writers pulled together to do a fundraiser for you at Dragon's Keep. What was it like for you to see that kind of support, and how did the event go?

Jake: It was amazing. The comics industry in Utah is a pretty close group. I was really grateful for the support from the artists--that they were so willing to help us out. The even was a smashing success. Really helped us with our med bills! 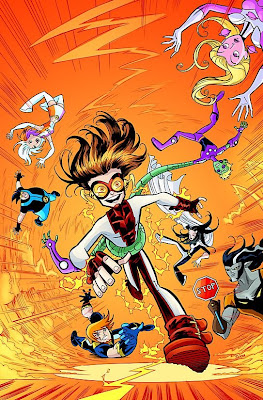 Gavin: Career wise, what have you got in the works that people can look forward to?

Jake: In October, I have a story in DC's "Halloween Special" (as does fellow Utah writer Mandy McMurray), as well as a story in DC's "Cartoon Network Action Pack #42." November sees the release of the non-comics Ender's Game Companion, the encyclopedia of the Ender's Game sci-fi novel series. December brings Ender's Game: War of Gifts from Marvel. In January I have a couple of kid's books based on "Batman: The Brave & The Bold" animated series. In addition to all that, Cartoon Network is airing episodes I wrote for series "Chaotic" and "Ben 10: Alien Force."

Gavin: A bit local, what's your take on the comics coming out of Utah right now?

Jake: We've got a lot of talented creators here. I love seeing my friends succeed, and I think they deserve to. They're putting out some fantastic stuff!

Gavin: Anything you believe could be done to make things more prominent?

Jake: I think the comics industry as a whole is in a period of transition. With the merger between Marvel and Disney and corporate restructuring at DC, I think there will be ripple effects across comics--even down to us local independent guys. I like to think that they will be positive ripples that will make not only the local stuff, but comics in general, more prominent. But we'll have to wait and see.

Gavin: Going a little more national, what are your thoughts on the comics today, both good and bad?

Jake: I don't have a lot of bad to say. I just think it's an interesting time to be a comics creator and a fan. Like I said before, I think it's a period of transition, and there's a lot of wait and see these days. I do think that the products being put out are quite good for the most part.

Gavin: If you had to make a top five, what are your most favorite comics currently out?

Gavin: What can we expect from you for the rest of the year?

Jake: Well, in addition to the projects I mentioned already, I think you can expect that I'll keep writing. Hopefully you can expect entertaining stories, if nothing else! I've never thought I was the greatest writer out there, but I hope that my stories are entertaining for the few minutes it takes to read them!