With plenty of other (and lesser) local sports going on Saturday night, the Salt City Derby Girls still packed in the crowd—albeit most of them late—at the Salt Palace for their 2009 Championship Bout between reigning rink queens Leave It to Cleavers and victory-hungry upstarts Sisters of No Mercy.---

But, even with Satan on their side (literally—she showed up wearing a sheer red bodysuit and a pitchfork), the Sisters couldn’t convert the Cleavers’ undefeated season streak, the nuns falling short with a final score of 68 to the housewives’ 125. That’s two back-to-back winning seasons for the Leave It to Cleavers.

At the beginning of the night, however, it was anyone’s game: The Cleavers got on the board first with a quick ‘n’ easy jam by Dirty Pirate Hooker, but an unprecedented (for the jammer-light Sisters) scoring tear by Merry Masochist, Nyda the Dead and Beracooter put the Sisters in the lead midway through the bout’s first half.

But the Cleavers’ jammer-heavy roster soon vanquished any hope of the Sisters staying there, tightening the numbers until China White shot through the pack like a bullet through Velveeta for her first of several Hot Tricks (five-point laps). The Cleavers were back in front, and remained there for the rest of the first half, thanks to subsequent scoring runs by England’s Glory—but no thanks to the Sisters’ quickly-amped defense, which saw them sending many a red jersey to the Salt Palace’s concrete floor.

Score at halftime: Leave It to Cleavers 65, Sisters of no Mercy 32.

The Sisters’ defense only got more brutal in the second half; their infamous Unholy Wall of Black knocking around Cleavers like Barbie dolls in a bowling lane. On the scoring front, Sisters Merry Masochist (back after an early-season broken arm) and Beracooter turned in several impressive jams and the occasional Hot Trick, but the Cleavers’ inexhaustible point machine couldn’t be stopped: With 15 minutes left in the bout, the Cleavers had stacked up an insurmountable 99 to the Sisters’ 58.

With the coveted SCDG Championship Golden Skate trophy within their grasp, the Leave It to Cleavers seemed to relax slightly in the bout’s final minutes—enough for the Sisters of No Mercy to make several easy scoring runs, but nowhere near enough to close the gap. The trailing nuns made up for it by smacking up the housewives yet more; even first-season Sister Miss Mafiosa (who probably weighs a buck-5 in skate gear and gold hot pants) got in a few visceral hits before the last buzzer.

Next month, the Salt City Derby Girls’ all-star Shakers travel to Los Angeles to take on the Angel City Derby Girls (Oct. 16); after that, the SCDG will hold a rare post-season expo bout to capitalize on the roller-derby hype of Drew Barrymore’s Whip It movie, opening this weekend. Also, you can watch most of the SCDG’s 2009 bouts in Comcast Cable’s Utah On-Demand section, under “SLC Derby Girls.” 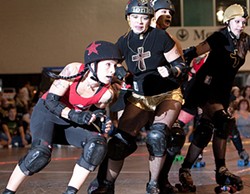