We may technically still be in the dead of winter, but that hasn't stopped any of the talented Graffiti artists from doing their thing across the city. In fact during 2009, professional Graff artists and writers produced more work around downtown and surrounding areas than at any point during the prior five years. And with the artform now gaining acceptance from local businesses who want a new look outside their doors, don't be shocked if this summer starts looking a tad more colorful.

--- One of the many names behind the uprise is that of Dusk One. Honing his skills for years and being one of the breakout displayed artists from the 337 Project, you can find Dusk's unique works can be found across the city and even sitting in some people's homes for his paintings. Not to mention his work with MindState, but we'll talk more on that next week. I got to chat with Dusk about his works and influence on the Graff scene, as well as his take on local art at large.

Gavin: Hey Ryan! First off, tell us a bit about yourself.

Dusk: Born and raised in Utah, been into art & music since I was a kid. Got really interested in hip-hop as a teenager and through that got into graffiti. Although I was graffiti wasn't the first thing that came to mind when people thought about me it is definitely my biggest artistic influence. I'm probably best known as the MC half of hip-hop group MindState.

Gavin: What first got you into art, and what were some of your early inspirations?

Dusk: I was always encouraged to be creative growing up. I got inspired early on by cartoons and skateboard graphics . As I moved into my teens I noticed graffiti popping up around the city, flyers, and album artwork were also big influences as I've always been really into music too.

Gavin: How did you get drawn toward Graffiti and how did you first get involved with it?

Dusk: Probably like a lot of people I was attracted to the fact that the writers who did the first graffiti I saw were getting over on "The System." I remember being amazed that whoever was doing it would go to such great lengths to make their mark and make sure everyone in the city was aware of their existence. If nothing else, you have to admire the tenacity of a person who is willing to climb onto the roof of a building in the middle of the night to paint.

Gavin: What were some of your first pieces like, and how was it for you honing your technique?

Dusk: My first attempts weren't pretty ha-ha. If you're really interested in something you just stick with it and eventually start figuring out your style and technique. There is not greater motivation than finishing something and knowing you can do better. You practice 'till your hand can create what you see in you brain.

Gavin: In your experience, is there any real way to learn Graff, or is it more trial and error?

Dusk: The only way to figure it out is to keep trying and hopefully someone who knows better will see your enthusiasm and kick you down some knowledge. As far as learning how to do it, it's really something you have to stick with, spray paint is a hell of a medium to master. I'm still learning myself.

Gavin: When you create pieces, do you put them on paper first or do you work from vision in your mind?

Dusk: I've never been huge into planning out any artwork. I occasionally use a rough sketch, but mostly I don't decide what I'm going to do until I'm doing it. I have a pretty defined style, so once I get going on something it's pretty automatic.

Gavin: How do you decide where to create a piece and how it will look on that particular site?

Dusk: A graffiti writer looks at the city in a different way than regular people. They don't just see buildings and walls, every surface has it's possibilities. I would compare it to how a skateboarder can turn a curb, a bank, or a set of stairs into something where they can flex their skills.

Gavin: Do you get hassled by the police for your work or do you tend to stay on good terms with them?

Dusk: I don't really have to deal with the police, any walls I paint these days are because I've been asked to do so. I didn't do enough illegal Graff to be on anyone's radar as any kind of heavy hitter. Anyone that is doing a serious amount of graffiti in a city the size of Salt Lake will get unwanted attention from the law.

Gavin: What are your thoughts on Graffiti as a whole in Utah, both good and bad?

Dusk: Graffiti in Utah is cool, it is what it is. To me it's one of those things that always has been and always will be. not everyone likes it and I get that, but I like seeing it in all it's forms. The only bad thing in my opinion is all this BS where people are tagging around legal walls and dissing pieces. That burns those spots for the writers who actually have the skills to make them worth looking at. Also it's not cool to write on private property, churches, schools, or local businesses.

Gavin: Does it ever frustrate you that its not really recognized as a major art form here, or do you enjoy that underground status?

Dusk: I'd say as time goes on it's getting more recognition, but that doesn't really matter. Art is art and graffiti is graffiti. The whole idea is that when someone is actively participating in graffiti they're playing the part of the outlaw and going above and beyond the rules.

Gavin: Do you ever look over other Graff around the city for what others are doing, or do you concentrate more on your own pieces?

Dusk: We're all influenced and we all influence. To me it's two sides of the same coin. However, originality is probably more important in graffiti than in any other form of creative expression. Your very reputation hangs on that. 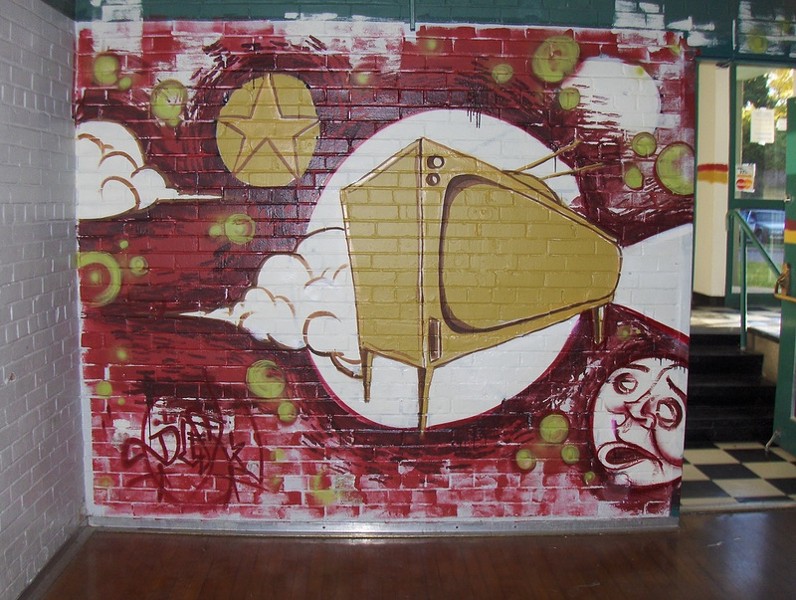 Gavin: You participated in the 337 Project. How did you get involved with that, and how is it for you seeing how its affected the art community?

Dusk: I got involved entirely by chance but I'm glad I did. Up until then art had been reduced to a side hobby due to my involvement in music. Getting a chance to cut loose like that was huge to me and really got me excited to do art again. Big up to Adam & Desi Price for making it happen.

Gavin: Do you do commissioned work for people?

Dusk: I do some commission work. Most of the time some one is asking for art from me they want what I do already on my own. So the process is pretty easy in that respect. Sometimes there are special requests. In that case we discuss the details and I'll gladly do my best to make sure they get what they want. If anyone out there wants commissioned Graff work, go to Uprok Records and they can set you up with someone.

Gavin: What do you recommend for people looking to get into doing Graff?

Dusk: Make sure you're getting into it for the right reason, and understand the possible consequences. Also... DON'T GET CAUGHT!!! With the new laws I'll hear of kids getting popped for their first time and catching a felony. It's pretty unreasonable, who really benefits from that? Certainly not some kid who gets caught for the first time doing graffiti and then sent to criminal college (jail). All proof of the crime is gone once the graffiti is painted over. I don't know how anyone can hand down those sort of sentences with the notion that they're helping anyone, except maybe the state due to the massive fines involved in those situations.

Gavin: Aside from your artwork, you're also an accomplished MC in the music scene. How did you get into doing that?

Dusk: Music and art have always gone hand in hand for me. I got started in rapping because I wanted to make my own version of the music that I loved. I like finding ways to do them together. If I'm playing a show I'll also draw the flyer.

Gavin: Going local for a moment, what's your take on our local art scene, both good and bad?

Dusk: The local art scene is dope! Some of my biggest influences are local artists. Big up to Patiri Photography, Kier, Trent Call, Guts4, Snipe, Chew, Riktor and Aster.

Dusk: Art in Utah seems to be getting more coverage these days. I'd encourage people to go and see what's out there. There is more diversity in the art being made here than most people realize. More murals would be dope, there are so many blank walls in this city. If you go to other cities nine times out of ten, where there once was a bland boring blank was is now an amazing piece of art for the city to enjoy.

Dusk: So far 2010 has been super busy. Expect more of everything I do. Art shows, hip-hop shows, paintings, flyers, and more music. Probably the biggest news is I'm part of “The Alive & Well Tour” thanks to my man MC Pigpen! It's a 25-30 city tour this spring made up entirely of 801 hip-hop.