Christmas Eve for Bountiful-born and raised Sgt Carrie Mehr had a bite to it at Jalalabad base in Afghanistan. Three mortars in 30 minutes hit the base. "Don't know why they always pick the holidays," Mehr emails.New Year's Eve, however, was quiet, which struck Mehr as odd. "Then would have been more fitting in my opinion!"---

Mehr's been in Afghanistan since shortly after Thanksgiving 2009. She seems to be settling down to her gig running the post office at the forwards operation base [FOB]. She's been out to visit smaller FOBs. "We fly mostly by helicopter which I think is pretty cool. {The Afghanistan landscape] looks a lot like Tooele and the Oquirrh mountain area."

Despite the mortars, fear doesn't seem to factor in to daily life out there. "We are pretty protected if anything did so south with about humm around 3,000 people armed with some type of weaponry on their person at all times."

Relationships with local Afghanis seem to be limited. Partly, she writes, that because she's a woman which "doesn't leave a lot of space for friendship. There isn't much middle ground, you talk to them, they want to marry you." She works with an Afghan called Con at the post office. "He's alright though I'll catch him staring at me ... it's probably more awkward for me than him." 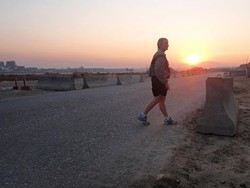