Lunch with the Utah League of Women Voters | Buzz Blog

Lunch with the Utah League of Women Voters

Six well-versed women and one new male represent the Utah League of Women Voters at a round table in the Capitol Cafeteria. Over soup and salad, these veterans of Utah Legislature and policy discuss bill tracking and advocacy. As written about in Citizen Revolt (2/11), their 12:30 Tuesday strategic meeting is open to the public---, where each of the six women discuss the bills and opinions in their respective areas of interest. One watches Natural Resources, another Health & Human Services, yet another Education, and so on.

Sherman Bloom recently moved to Salt Lake City from Mississippi and joined the Utah League. About his first impressions, he says, "I started getting all these e-mails. [In Mississippi] most of the time people would just donate money. These women are actually active, doing something good," Bloom says.


The League, a nonpartisan political organization, or government watchdog, is an educator and advocacy group promoting informed and active participation in government. On a national level, the League is celebrating its 90th birthday this month.%uFFFD%uFFFD

Utah League Legislative action corps Marilyn Bown simply says that the League is "concerned about issues and the betterment of society." Brown oversees education committees for the League and spearheads the most lively discussion at this lunch.

"For the first time in my life, I might actually be in agreement with Chris Buttars [R-West Jordan]. Maybe there shouldn't be a senior year," Bown says. She relates her years as a teacher at Salt Lake Community College, and that, to her, it seems that for a third of high school seniors, it's a waste of time. As chatter straddled the fence on the issue, the League tries to decide its position as the bill continues on.%uFFFD

"We don't have to have a position. But, we can write a letter and ask questions to the Senate Education committee," says vice president of programming Gigi Brandt (pictured above), who joined the Utah League in 1971. She says that essentially, at its core, this is what the League does: asks the right questions and relates the information to the public.

Brandt hopes to see more citizen lobbyists on the Hill. If folks can't make it up but still want to promote their causes and concerns, she says, "My advice is to write your Legislature and congressmen once a week. That's easy enough."%uFFFD

During lunch, activist Tami Stanley was invited to present ideas about HB66, a bill that would help amputees obtain prosthetic limbs. She's asking for coverage that is essentially already there, so that amputees are not discriminated against. "There are caps that limit the coverage on what is outside of the body, less so for internal organs. There aren't many amputees, so it's not driven by demand," Stanley says. She lost a leg with a sports injury several years ago. "When I was thrown into this world, I was appalled." 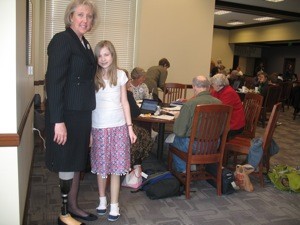 "I think it actually has a chance getting through." says Jenn Gonnelly, who oversees Health and Human Services issues for the League. She says that besides the trauma, without their leg, they lose their job and, in general, who they used to be. "Why are we not making opportunities for them to stay in the workforce?"

The bill is currently in the Business and Labor Committee, but Stanley hopes that it will be moved elsewhere where it will have a better chance. However, critics are skeptical that the bill will go anywhere because the health care reform promoted by Speaker Dave Clark, R-Santa Clara, is front and center.


This is just a sampling of the issues these women are following, And, throughout the course of the Legislature, I will continue to follow the Utah League of Women and report their progress.