Wasatch led the bout for the first half and most of the second, thanks to several scoring jams by the ever-quicker Queen’s Anne’s Revenge and Honey DeLunatic, as well as some brutal defense. WRD led at the half, 59-41, over TVRG.

Treasure Valley played a wildly uneven game, looking like first-night amateurs at some points, seasoned pros the next. The latter took over in the homestretch, when TVRG rallied to tie the score every time the by-then-spent WRD pulled ahead. At the final buzzer (had there been an actual buzzer), Treasure Valley came out on top, 126-121, over Wasatch.

Wasatch Roller Derby’s next bout is Saturday, March 13 at the Salt Palace. All local roller-derby leagues’ 2010 schedules can be found in the CityWeekly.net Sports blog, Utah Roller Derby: 2010 Preview. 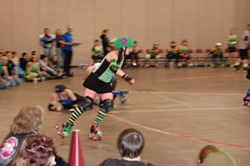