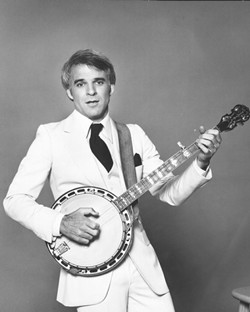 The biggest news is that the recently renovated venue is hosting a whopping 21 shows this year—more than any previous summer. And while the lineup lacks some of the adventurous choices of recent years—there's no Wilco, Death Cab for Cutie or Avett Brothers—there are plenty of shows that will inevitably become some of the highlights of the summer concert season.

Among the shows I'm most looking forward to: Steve Martin and the Steep Canyon Rangers (June 16) kicking out "an evening of bluegrass and the banjo." New Orleans legend Allen Toussaint with Dirty Dozen Brass Band (August 8), John Prine (August 19) and, of course, Willie Nelson, a long-time fave (September 10).