Wasatch Roller Derby’s Midnight Terror had the pleasure of hosting the Hellion Rebellion from Calgary, Canada Saturday, April 10, for an afternoon bout at Taylorsville Recreation Center. The Midnight Terror skated hard and continue to work to make a name for themselves in the roller derby community. This game marks the fifth game of the season for Wasatch Roller Derby.

Coming onto this game, not much was known of the Canadian team. What showed up was a group of hard-hitting blockers and quick-footed jammers but it was not enough to over power the skaters of Midnight Terror. Skating on home turf, a familiar track and the cheers of their fans helped WRD bring home a welcomed victory. After two periods of spills and thrills the final score of the game was WRD Midnight Terror 159, Calgary HR 58.

Check out the Wasatch Roller Derby B-Team play the O-Town Derby Dames this Saturday, April 17 at the Marshall White Community Center in Ogden. More info at WasatchRollerDerby.com and OTownDerbyDames.com 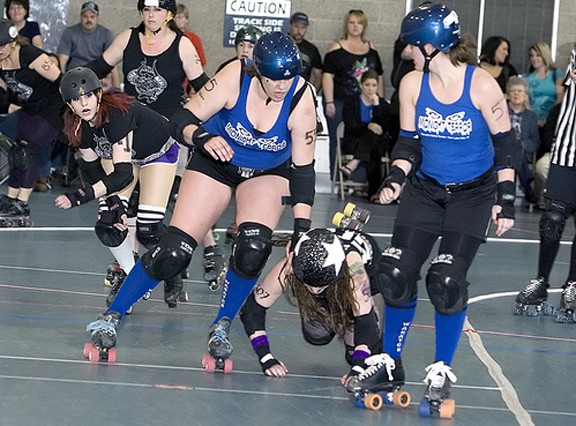