Hello to all you alterna-grunge-emo-nu-gen-x music enthusiasts! Before we talk on that and then some, let's take a look at the latest addition to the 337 Memorial Wall.

--- Starting off briefly with comics, next Saturday is the official Free Comic Book Day event. First Saturday of every month comic book stores across the nation, including all those here in Utah, are given free comic books by most comic publishers to give away for free. One of the core intents to this is to get people not just interested in the medium, but to rekindle interest in reading. On Friday I'll have more detailed info for you on more local happenings for the event. 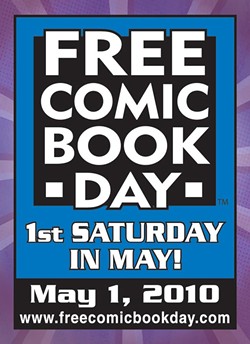 Moving to theatre, since I covered it last year I'm skipping the interview, but still letting you know Plan-B Theatre Company's production of And The Banned Slammed On will take place on May 1st. Hosted by Bill Allred and Doug Fabrizio, the event takes five playwrights and throws topical news ideas about censorship in Utah at them for them to write out as plays with three random actors, all to be performed within 24 hours of receiving the material. As of right now tickets are still on sale but fading quickly, grab you own pair soon as ths show is always a sellout. 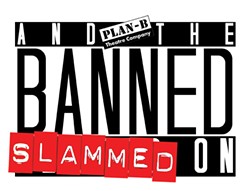 Moving onto the following Sunday, over at Kilby Court will be The Salty Streets Flea Market. From Noon-6PM over twenty vendors, artists, crafters, designers and more will be on hand to show off and sell you their goods. And since it's Kilby of course there's live music. And at the end of it all they'll be donating select proceeds towards The Empowerment Project. With about a week left there's probably more to be added, so be sure to head down and check it all out next Sunday!

Speaking of crafters, if you haven't gotten word, SLUG Magazine's Craft Lake City is officially taking entries for their big 2010 festival. Last year's events went well over all expectations and put a lot of local artists and craft makers not just on the radar, but have started making them household must-haves. Not to mention all the activities and impressive musical lineup playing throughout the day. Applications are being accepted up until June 4th. Head on over to this link here to sign up! 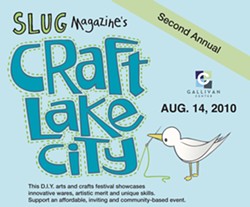 And finally, a brief chat about The End. Which I debated over talking about because at first glance anything I have to write will sound like I'm pissing on a grave. But then those old memories kicked in and I thought, why not. Like most of you reading, I'm not all that sad to see it go. The one good quality the station used to have when it first kicked in was that it played alternative music that others didn't. While X96 went more nu-metal and crybaby emo, and KBER was whoring itself out to Metallica for 14 hours a day, The End was still playing new material from artists like They Might Be Giants, Grant Lee Buffalo, R.E.M., The Cardigans, Jars Of Clay, Tori Amos and Violent Femmes. In fact up until they became the All-John-Mayer station in 2001 they were actually a decent selection for music. Even for a brief moment, decent people, as they gave former X96 DJ Cuzzin Brad a home for a short period. (Oh Cuzzin my Cuzzin, shoot me a line, sir!) But poor music selection over the past ten years, topped off with the worst morning show around and pulling the ol' “Same Shit, Different Destination” maneuver by moving to 101.9, the station became what every radio station dreads becoming... irrelevant. So those of you who were fans, don't worry, it died about two years ago anyway. This would be the moment to pull out a old 20oz Surge, take a swig for yourself, and after the sugar rush pour one to the ground for 107.5. And to wrap it all up, let me take this moment to wish Chu-, wait, I mean Brett Smith luck in his "acting" career and all future endeavors.

As for the blog over the next couple of weeks we'll chat with a local author, hit up a metalworks artist, chat comedy on a bigger scale, hit up a local concert, chat photography with a former columnist and chat up the biggest bazaar of the spring. Or at least I hope as 2010 has been very unpredictable as to what I end up doing. As always, we'll see what happens.