The Salt City Derby Girls kicked off their 2010 roller derby season with a packed-house double-header at the Salt Palace Saturday night. Well, packed for the first bout ...---

The first bout saw SCDG’s all-star Shakers taking on Bend, Ore.’s Lava City Roller Dolls in a tight match: The Shakers got on the board first with a quick series of scoring jams by NOS and the returning Moonraker, nearly matched by Lava City jammers Speedo Bandito and Buxom Booty. But, when Lava City cranked up their defense, the bout became more physical and, while hits were flying everywhere (most notably from the Shakers’ Berecooter and Lava City’s Ophelia Melons), Lava City slipped by the Shakers in points. Score at the half: Lava City 44, Salt City 39.

The second half of Bout 1 was even more hard-hitting; both teams ratcheted up their defense, and Lava City’s Deemoralizer was taken out with an injury late in the period. Despite several impressive scoring jams by NOS and Moonraker, the Shakers could never quite close the point gap. Final score: Lava City 77, Salt City 74.

The second bout of the double-header (in front of a noticeably-thinned crowd) featured home teams the Death Dealers and the Sisters of No Mercy. The Sisters scored first, but were soon passed up by the Dealers, thanks to several scoring jams by Roller Kitty and Moonraker (pulling double duty Saturday, as were several skaters from both teams). Sisters jammer Alexa Rough went down hard in the first half, spraying the track with blood and halting the game for cleanup. When play resumed, fellow Sisters jammers Nyda the Dead and Hera Ticked worked hard to make up points, evening the score. Halftime: Sisters 36, Dealers 34.

The Sisters’ lead was lost soon in the second half; the nuns made up for their jamming slide by hitting the Dealers harder and more often (once again, most notably by previous Shakers Berecooter and Miss Mafiosa). The Dealers responded with more and more scoring runs, outpacing the winded Sisters. Final score: Death Dealers 120, Sisters of No Mercy 54. 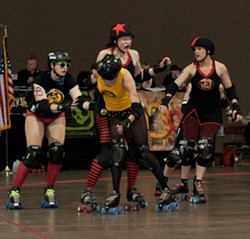 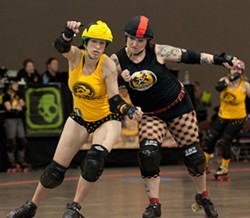 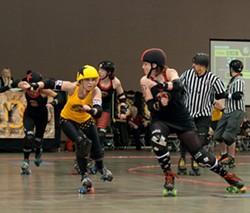