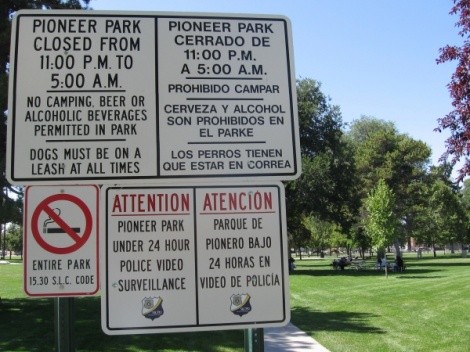 This post has been updated three times. Please see the bottom for updates.

Crossroads Urban Center and fellow activists will protest Salt Lake City's ordinance forbidding camping in parks Thursday at Washington Square by staging a "sleep in." ---The activists complain that when homeless shelters are full that it's cruel and unusual to then hassle or issue citations against people for laying down with a blanket in a park. In addition to the demonstration, they're also considering suing the city.

The demonstration will be held at noon Thursday on Washington Square, the park surrounding the City County Building in downtown Salt Lake City. People will break the law and lay blankets down, announcing their intention to nap.

The Road Home homeless shelter, for example, has waiting lists containing the names of more than 50 families, 32 women and over 100 men, according numbers provided by Crossroads Urban Center. Representatives at the shelter could not immediately confirm those numbers but said there has been a waiting list every day since April 1.

Crossroads' Bill Tibbits says that enforcing the ordinance sometimes may violate the Constitutional rights of homeless people who just want to take a nap. The anti-camping ordinance contains a measure that also forbids "bedding or any other type of camping or sleeping equipment." Two individuals have complained that police hassled them this week for napping with a blanket.

"Basically you can't sleep in the park at night because of the rules about the hours it's open. So if you're trying to be ... even the most conscientious homeless person who wants to be law-abiding, your option is to walk around all night and sleep during the day, but you can't [do that either]," Tibbets says. "This has been one of the warmest days since the overflow shelter closed and 55 [degrees] is the high today."

Tibbits says they're "exploring the feasibility of litigation" against the city to stop enforcement of the ordinance, at least during times when the shelters are full. He provided this, this and this as examples of similar litigation in other areas.

Salt Lake City Mayor Ralph Becker riled some homeless advocates last year by proposing new restrictions on panhandling. That proposal has yet to be presented to the City Council, but it's still being worked on. In the wake of the controversy, the mayor's office provided City Weekly with a list of city spending over five years--some preceding this administration--on homeless issues and programs. That list is as follows:

"Also worth noting, the City consistently spends the full dollar amount possible each year out of the Emergency Shelter Grant (about $900k over the last 5 years) and does not utilize those funds for administrative services offered by City employees," writes mayor spokesperson Lisa Harrison-Smith in an e-mail to City Weekly.

Caveat: This list puts $220,000 next to the Weigand Day Shelter, for example, but the Mayor's proposed budget for that facility for next year is $88,000. I'm sure there are similar examples one could find in the mayor's new budget proposal, released last week.

I called the mayor's office for a comment on the planned demonstration. I haven't heard back yet, but will update here when I do.(see the update below!)

All this reminds me of the early 1990s when hundreds of homeless people encamped around San Francisco's City Hall. Were they protesting or just living? As I recall, those people camped on City Hall's grounds for years, not just one day. It's so long ago I can't find a decent link for more information. Maybe someone can help me out in comments because I'd like to remember better than I do.

update 5-6-10 3:55 p.m - Blankets were laid, the napping happened. I also talked to mayor's office spokesperson Lisa Harrison-Smith, who emphasized that the city ordinance forbids camping in parks, not sleeping by itself--she downplays the "bedding ... and sleeping equipment" provision. She has been assured that not even one citation under this ordinance has been issued in the past year but acknowledges that there is no data to show whether police officers are waking people to educate them on the camping/bedding ordinance, or ordering them to leave with just a warning. On that note, she said Salt Lake City Police Chief Chris Burbank assured her that as a matter of policy, even if a person is sleeping with a blanket, that police don't wake sleeping individuals unless there is a concern for their health. Finally, she said the mayor's office has no interest in changing the ordinance.

Update 5-11-10 9 a.m. Salt Lake City Police Chief Chris Burbank issued a statement saying the department will suspend enforcement of the anti-camping ordinance until a review can be finished. "Concerns expressed in media reports are valid," Burbank said in a press release. The statement was issued May 7. I'm late to the game on this news because I was out of the office and didn't get a chance to update until today. Tibbets responded, "Within 24 hours of this issue being brought to his attention, the Chief of Police has taken really strong action to ensure homeless people are being treated with dignity."

Update 5-11-10 4:26 p.m. There's also this from the Salt Lake Tribune: "Salt Lake City Police Chief Chris Burbank also said the department was wrong in saying no one had been cited for sleeping in public parks. In fact, about 30 citations were issued under the city's 'no camping' ordinance and another 440 tickets under three related statutes over the past year."