As desert and music lovin' festival fans disperse from outside of Moab, wiping off the remnants of dust to re-enter the humdrum of everyday life, here's a look in the rear view at Desert Rocks Music Festival 2010:--- 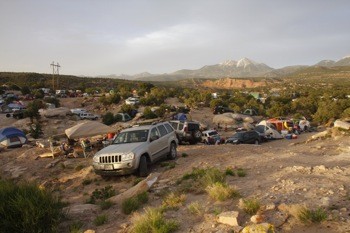 Whether it be an incredible lineup of Utah artists and national acts, camping, mixing and mingling with new and old friends or hammock swinging 12-feet in the air at the SolLun, Desert Rocks maintained no shortage of fun and community spirit. The festival opened up on Thursday for the general public; those hoping to arrive later than Thursday afternoon and score a primo camping spot, were surprised because it fills up quickly.  Although, someone could walk across the festival grounds, from end to end, in less than half an hour. Lesson learned, plus for next year: Don't mistake the importance of a solid camp with plenty of shade (which can be in short supply) for afternoon siestas or going to bed as the sun rises.

On Friday, a midday set from Salt Lake City locals Marinade kicked off the music with some soulful, bluesy-rock. Then, to escape the wind—it was incredibly windy—and heat (or the mediocre Hip-hop from the mainstage) folks flocked to the SolLun stage. The 100% solar powered art installation that's graced Burning Man previously was multi-faceted, to say the least. The Solar Saucer spun out tunes beside the small outdoor stage, where a variety of cleverly named acts performed, including Friday's Crippled Stripper and the Feel Good Patrol. Upon entering the geodesic dome structure of the SolLun, solar powered patrons where likely to get clobbered with a seven-foot diameter cushioned ball dropped from the ceiling, as the crowd cheered, "Boulder Alley." This was just one of the many games for big kids to play on. The structure is sturdy enough for folks to climb on, around or even up to the 14-or so foot high top. It wasn't uncommon to see 10-plus people in hammocks, swings, ropes or on steel suspended above couches, a bar and piano (one rambuncious man played that piano with his feet while he hung from the dome). Overall, an incredible playground for the young or young-at-heart.

When Desert Rocks veterans The Mother Hips took the stage around 10 p.m., festival goers poured out from every nook of the desert grounds to partake in the sweet rock from this San Fransisco-based band. Although from the Bay, these boys have the heart and soul of the desert in their songs, making them a perfect fit for the festival. Singer/ guitarist Tim Bluhm looks like the desert, if anyone could. His dusty blond hair and lanky figure make him seem cactus-like, made for harsh environs; but, when he approaches (or should I say stalks) the mic, wind-sweeping through his frame, he looks predator-like. The band played cuts off of their newest Pacific Dust, along with classics.

Afterwards, The Motet and Friends might have put on the tightest, well-rounded set of the festival. This band has no shortage of creativity and diversity: Afrobeat meets Latin-funk meets Dance-alicious grooves meets incredible covers (from Talking Heads and Jamiroquai). Along with the midnight music, Sol Weavers Fire Dance harnessed the flame and danced to the rhythms. An hour and a half dance party ensued, catapulting the evening right into the morning. Juno What? then Equaleyes played the main stage until the sun came up. 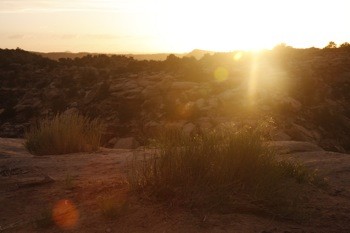 The weather cleared for Saturday and folks spent the day at the provided yoga class or hula hooping, napping, hiking and on excursions away from the festival grounds. The music began again at 1 p.m. As everyone woke up and meandered back to the festival and the afternoon turned into night, Chali 2na of Jurassic 5 got the party started. Chali's stage presence and cheery demeanor enlivens crowds everywhere he goes. He's become a constant in Salt Lake City and despite seeing him several times recently, the more I see him, the more I love his feel-good vibe. This performance bled into an Al Howard Spoken Word 10-minute set, demonstrating Desert Rocks attention to detail and diversity.

Reggae was Saturday night's theme. Salt Lake City locals Afro Omega played the Uncanny Stage, which was the smaller side-stage located directly next to the main stage. The two stages created constant music without waiting for band setup or walking across the grounds to another stage. Groundation, whom City Weekly interviewed in previewing Desert Rocks, owned the main stage. For a small festival, the sound was impressive in its clarity and volume, which was especially brought out with Groundation's set. The next day, the soundman Rick told me there were 32 microphones onstage during the set. Groundation is not averse to long jams and let musical progressions go where they would, then would quickly tighten it up with cuts like "Could You Be Loved" by Bob Marley. The most impressively lingering aspect of the band is Harrison Stafford's impeccable voice, which only sounds better washed in reverb. Sol Weavers Fire Dance also performed.

Then, local bands Wisebird, Tanglewood and Stonefed played until the wee hours of the morn at the mainstage as DJs spun at the Solar Saucer.

Before leaving (or should I say being drug away ... no one wants to leave, really) Sunday, the Hula Hoop contest at the SolLun was exciting.

Then, the Emmitt-Nershi Band helped barefoot dancers in the front blow dust into the air with ferocious footwork. Comprised of Drew Emmitt of Leftover Salmon and Bill Nershi of String Cheese Incident and some backup artists, the boys have talent and swagger to spare.

If you weren't able to make it this year, go next year. You won't be disappointed. And, check out City Weekly's festival list for more local mashups and throwdowns for your Summer Fun.

Photos: Jennifer Leahy (except the first one)