After serving in one of the United States' armed forces for a good portion of your life, most who retire would either relax on the earnings they just received from the government, or take up a vocation that revolves somewhat around what they used to do. So it probably comes as an interesting twist to see someone go from that type of career to... comics?

--- Brady Canfield left the Air Force after twenty years of service to take up illustration and comics as a full-time endeavor from his Park City home. In the process of which, taking his sketches and ideas from those years and turning them into a self-published series known as Wombat Rue. I got a chance to chat with Brady about his two very different jobs as well as the new series, plus his thoughts on comics today.

Gavin: Hey Brady. First thing, tell us a bit about yourself.

Brady: My very first memory was when I was two, riding on a horse with my dad. The saddle horn was huge and felt like steering wheel. I convinced my dad to make the horse run, and away we went until it jumped a ditch and I went flying off. Dad caught my foot, threw me back on and we kept riding. I turned into a bit of a thrill seeker after that, but survived to become an adult, at least in age.

Gavin: How did you first take an interest in comics and what were some of your influences growing up?

Brady: I've loved cartoons since the first time I saw them as a little kid. Saturday mornings were the highlight of the week! Cartoons from early morning until lunch time, when the dreaded news came on. Ick! Who'd want to watch that? I loved watching “Rocky & Bullwinkle”, “Scooby Doo”, “Darkwing Duck”, reading Casper and Hot Stuff, and looking at Charlie Russell and Frank Frazetta paintings. A good psychologist might be able to explain how Wombat Rue grew out of that, I certainly can't.

Gavin: A rather strange note on the resume for a comic creator, you served in the Air Force for roughly twenty years. What made you choose to serve so many years ago?

Brady: I have a love for science, as well as art. My family steered me toward a "practical" degree in college, and art wasn't one of the choices, so I went into math until I figured out which science I liked the most. That became physics. The Air Force was an easy choice, because I wanted to get into the most cutting edge technology available, and they have it. Want to know where CD's came from? Yep, the Air Force.

Gavin: What was your experience like serving in the Air Force?

Brady: The word "teamwork" is a pale shadow for how well people work together in the Air Force. My experiences were priceless, regardless of the which job I had at the time.

Gavin: Along with that, you've competed in and won metals for Skeleton. How did you get involved with that sport and how have you faired competing over the years?

Brady: While I was stationed in upstate New York, I met a friend from the National Team, who took me to Lake Placid for a weekend. I tried Skeleton and fell in love with it. The rush of wind whipping by, getting louder and louder as you keep accelerating, ...it became a new passion. I did it as a hobby on weekends for about four years, then one year made the National Team, staying on it for the next ten years. My best year was 2003--US National Champion, and a bronze medal at World Championships. I was 39, and the 20-somethings were not happy. Heh heh heh. 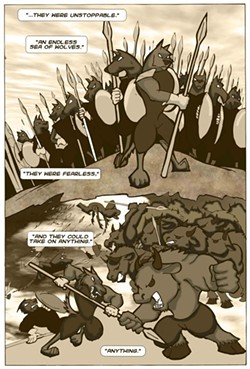 Gavin: I read that during your years of service you did a lot of sketch work in your spare time. Was it simply a hobby at the time or something you were aiming to do down the road?

Brady: I've always drawn, sketched, built, created, etc... so replace "hobby" with "passion" and we're ready to start. I didn't have a specific goal in mind at the time--between serving the Air Force, competing in Skeleton, and trying to be a good dad, my dance card was a bit full. However, I always wanted to create something that crossed outside the barrier of the "comic book" audience.

Gavin: What eventually made you decide to become a full-time artist and drawing your own comic?

Brady: The desire to create, the love of drawing. A blank piece of paper in front of you, the smell of the pencil when you sharpen it. The whole universe saying "here's what's available, use what you like." No boundaries, no rules, just imagination and a place to share it. I stepped out of the Air Force and away from Skeleton at the same time, so I had the time to pursue other dreams. Turns out making your own book from end to end takes a lot of time. Who knew? It's time I love spending though. Did I tell you I love doing art?

Gavin: How did the idea come about for Wombat Rue?

Brady: The name itself came from the Cold War. After that it became it's own animal, pun intended. One of my non-physics jobs was called Combat Crew (you can see where I'm going with this), it was on our uniforms, vehicles, everywhere. One day while going on what was called "Alert"--a 24 hour shift where we were the first line of defense against the big bad Soviet Union--I took note the crew vehicle in front of me. These trucks were not shiny hollywood vehicles, they were old, and what we had. This particular truck no longer said "Combat Crew". The paint was faded and chipped and beat up and said "ombat rew". My gray stuff processed "Wombat Rue" out of that, and a hero was born! (I pulled 267 alerts, by the way.) Then I researched what a wombat actually was. They're marsupials from Australia that look like a ball of fur with a big nose, and they dig. Once I was issued my creative license, I gave him hands, clothes, a shovel, a stoic attitude, and a world to rebuild.

Gavin: Considering your style and design, did you choose to do it in traditional sketching or with computer animation, and why?

Brady: I love the feeling of putting ink on paper. That's my favorite part of creating a drawing. I'll draw it in blue line, ink it, then from there take it to the computer for color and lettering. With the 21st century, the computer is a necessity at some point, no matter what the medium begins with. I do plan to animate Wombat Rue, make into full feature film. I watch movies with my eyes closed just to hear who might make a good voice actor.

Gavin: When you finally put out the first issue, what was the reaction like from people?

Brady: Embarrassingly positive. I have fans from all ages, mostly from people who normally don't read comics. The story makes people happy and they can't wait for the next issue. I was thrilled, inspired to get the next issues out for them, and hopefully new readers.

Gavin: Currently you have the first issue out and circulating around. What kind of schedule are you setting for yourself with this series?

Brady: Wombat Rue will be published bimonthly. The second issue came out less than two weeks ago and is in circulation now too. Every four issues will be bound into graphic novels, which will include "deleted scenes" and "out-takes". This assumes your readers buy it of course (so I can afford to print more issues - I don't have a fairy godmother throwing gold coins at me). 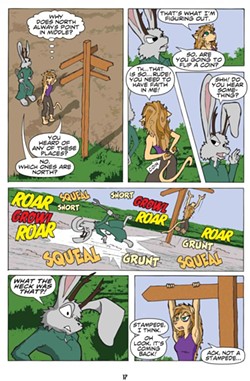 Gavin: Aside from the book, what other material are you working on now that you've made this your career?

Brady: I do life drawing as well. And I have ideas for at least three more comic book series. I'm hooked.

Gavin: Going a bit local, what's your take on the Utah comic book scene, both good and bad?

Brady: Well, this goes way beyond the comic book scene, although I've gotten an incredible reception from NightFlight Comcis. I've also been getting support from other local business owners that are carrying Wombat Rue - like a grocery store (The Market), gift shop (Livin Life), and soon an ice cream shop (Yellow Snow). The support is amazing, from fans to professionals. The fans, though small in number, are great people--kinda like a filet, a small amount of meat, but all choice. There are other local artists who are great people as well as great artists. The only bad I really see is the general misconception that comics are only for young boys - my fans include soccer moms and dads, grandparents and teenagers. There really is something out there for everyone - and that's what I aim to provide with Wombat Rue.

Gavin: Who are some of the artists and writers you read and would recommend?

Brady: Paul Dini is one of my favorite comic writers. He can tell a great story. I love the artwork of Skottie Young, Khary Randolph, and Ben Caldwell.

Gavin: On a more national scale, what are your thoughts on the comics industry today?

Brady: The industry is struggling. But I'm actually aiming beyond the comics industry - I want to get Wombat Rue into every grocery store in Utah! Then other states, then the WORLD! Do you know anyone who could help with that?

Gavin: If you had to make a top five, what are your most favorite titles currently out?

Brady: You can expect me to keep new issues coming every two months, and I want to start visiting schools and libraries promoting both literacy and art. I'd love to hear from teachers, schools, and libraries who want me to come give presentations or workshops.

Brady: Read Wombat Rue!! If you don't read comics, you should try this one, you really should. You won't regret it! I'll be at the Park Silly Sunday Market July 11, 18 & 25, and August 1 & 15 from 10AM-5PM each Sunday. I love to meet and chat with people about Wombat Rue and other immature topics. Drop by, say hello, and I'll give you a FREE sketch. Just because!