Macbeth has been dissected as Shakespeare’s best take on political treachery, his historical reflection of King James I’s Scottish ancestry and his effort to inject some magic and mysticism into a swashbuckling action yarn aimed to please the masses. ---It also happens to introduce one of literature’s most neurotic and entertainingly unhinged power couples.

The Wednesday night opening of the 2010 Utah Shakespearean Festival’s Macbeth offered a rapid-fire, highly engaging take on one of The Bard’s most familiar works. And front and center of the swirl of witches, sword fights and tripped-out visions is the relationship of Macbeth and his wife.

As played by Grant Goodman (Macbeth) and Kymberly Mellen (Lady Macbeth), the couple begins the play as attractive young innocents, he a returning war hero and she his steadfast anchor at home. All it takes is one chance meeting between Macbeth and the Weyward sisters--a.k.a. the witches--though, and the Macbeths quickly evolve into a backstabbing, secret-keeping power couple—an image familiar to anyone who follows modern-day politics.

What did the witches (below, l-r: Chelsea Steverson, Lillian Castillo, Monica Lopez) tell Macbeth to make his life and relationship take such a dramatic turn? Merely that he would one day be king of Scotland, and that he just might be immortal, incapable of being killed by “any man born of a woman,” among other, lesser revelations. Heady stuff, indeed, and the witches’ words just might be literature’s most famous spoiler-alert. 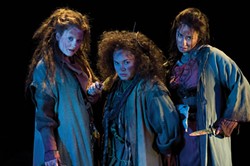 When, as the witches predicted, Duncan (the king of Scotland, played by Michael A. Harding) promotes Macbeth to be thane of Cawdor, Mac and the Missus take that to be a sign to sharpen the knives when Duncan comes to visit. Both the Macbeths struggle with their decision to off the king, but Lady Macbeth proves to have enough strength for both to pull off the coup; first she steels herself for murder, asking the gods to “unsex me” so she can be as conniving and lethal as a man, then beseeching her quivering husband to “look like the innocent flower, but be the serpent under it.” Even with the pep talk, Macbeth proves to have no stomach for murder. Literally—he pukes all over the stage before doing the devilish deed.

After Duncan’s death, the Macbeths both descend into varying levels of madness as they try and keep their hand in his demise secret, all while forces loyal to the king gather to avenge him. It is in this descent at the end of Act I and through Act II that the advantages of seeing a production at the USF’s outdoor Adams Theatre come clear. Twilight captured the early stages of the play fine, but the descending darkness seemed perfectly timed to the increasingly diabolical events on stage. Macbeth’s second encounter with the witches was greatly enhanced by the natural dark and the dramatic lighting delivered by lighting designer Donna Ruzika. And where once there was light saturating all corners of the stage, the stage later was a study in shadows and secrecy that melded well with the furtive action.

As Lady Macbeth and the king tried to deal with their guilty consciences, the audience gets some of the most famous parts of the Bard’s catalog, thanks to her “out, damned spot” sleepwalking episode, unable to get the subconscious blood off her hands, and he with the realization that life is a tale “told by an idiot, full of sound and fury and signifying nothing.”

By the time both Macbeths meet their respective ends—she offstage, probably by her own hand, and he at the hand of Macduff (a Duncan loyalist who conveniently was born via c-section, hence “not born of a woman”), they’ve left a bloody trail of bodies in their wake and been dismissed as a “dead butcher and his fiend-like queen.” It’s bloody good stuff.

Both Goodman and Mellen shine as the Macbeths, and several supporting roles were vital to the play’s success, from the comic asides of Porter (Tony Amendola) to the anguished former best friend Banquo (Don Burroughs). The costumes and stage design were ideal in reflecting 17th Century Scotland, and Fight Director T. Anthony Marotta had his hands full with this, a Shakespeare play with a seriously high body count.

Macbeth runs in repertory at the Utah Shakespearean Festival through Sept. 4. Visit the USF Website for show times and ticket information.