Review: The 39 Steps at the Utah Shakespearean Festival | Buzz Blog

Review: The 39 Steps at the Utah Shakespearean Festival 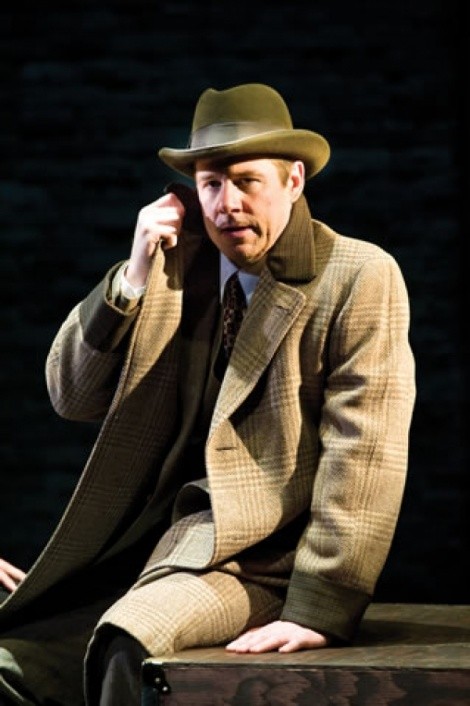 You know Alfred Hitchcock as a master of suspense and mystery, but how about slapstick farce?---

To be clear, The 39 Steps—at least the version on display at this year’s Utah Shakespearean Festival—is not solely the work of the British film legend. Nor did it begin as the Monty Python-lite comedy that became a hit in London and on Broadway. Hitchcock was merely one of the adapters of John Buchan’s 1915 spy novel, but he was the most well-known thanks to his 1935 film, which was in turn twisted by playwrights Simon Corble and Noddy Dimon into a stage show, which again was tweaked into a genuinely laugh-out-loud comedy in 2004 by Patrick Barlow.

That’s a circuitous explanation of the play’s genesis, but it’s far less convoluted than the plot itself, which challenges four actors to perform more than 150 roles over the course of its two hectic hours. And did I mention those same actors are largely responsible for moving the sets and props around the stage as well? Talk about earning your paycheck.

The story of The 39 Steps, boiled down, is this: an unremarkable man named Richard Hannay (Brian Vaughn) is roped into an international spy conspiracy by a mystery woman who follows him home from a night at the theater, only to be murdered in his London apartment after passing Hannay a note pointing him toward a professor in Scotland. A series of mistaken identities, train rides, car chases and near-death experiences lands Hannay in a face-off with the leader of a Nazi German spy ring. Naturally, hilarity ensues.

Actually, the hilarity ensues well before that, watching the four-person cast run themselves ragged to tackle the challenging, high-energy stage directions. Vaughn is the only actor with just one role to play; David Ivers, Aaron Galligan-Stierle and Carol Linnea Johnson all do incredibly tough and highly entertaining work tackling about 150 roles between them, from inn keepers to cops, femme fatales to housewives. Throw in a bunch of shifting accents—British, German, Scottish—often in the course of one conversation, and the performances are even more impressive. 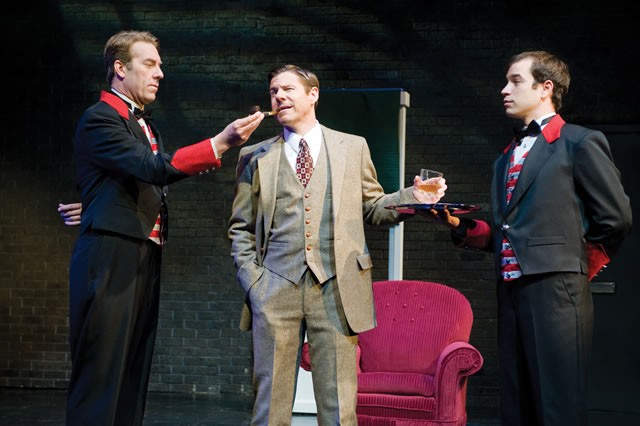 That’s not to say Vaughn doesn’t earn his keep. His Hannay is essentially chased throughout the play, leading Vaughn to climb walls in the back of the stage, shimmy down ropes from theater box seats and slide along the floor to replicate the action of hanging on to the bottom of a train. It’s an incredibly physical performance, and his natural appeal as an actor makes the audience root for Hannay as he, and they, weave through the over-the-top machinations of the plot.

The nature of the production—it’s a theatrical high-wire act, for sure—led to several impromptu rounds of applause from the audience after particularly witty or challenging exchanges, such as one point when Ivers and Galligan-Stierle delivered a rapid-fire eight-person scene simply by constantly, and quickly, swapping hats.

The show bends over backwards to make references to other Hitchcock works; some of those episodes are clever, some downright silly (birds falling from the ceiling in piles comes to mind, as does an homage to the Psycho shower scene). And Hitchcock himself makes a cameo, as he is wont to do, in one of the entertaining uses of shadow puppets. Yes, shadow puppets play a major part of this show, and it’s better for it.

The first act works far better than the second, when the Hannay character reaches for some poignancy in reflecting on how his life’s been turned upside down, and when a misguided attempt at adding screwball romantic comedy into the mix slows things down. But The 39 Steps is still a refreshing change of pace among the Shakespeare shows and American classics that typically fill the slate of the Utah Shakespearean Festival.

Alfred Hitchcock’s The 39 Steps plays in repertory at the Utah Shakespearean Festival until Aug. 27. Visit the USF Website for tickets and show times.