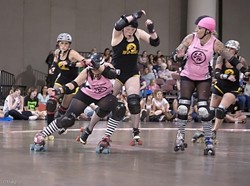 Saturday, July 10: Phoenix’s Arizona Roller Derby narrowly defeated the Salt City Derby Girls in a bout that was tighter than a mosquito’s tweeter, to paraphrase Nina Simone (Wiki it, kids). ---

The Salt Palace crowd of roller-derby fans roared as SCDG’s all-star Shakers team as jammers China White, Moonraker and NOS racked up a quick succession of points early in the bout, but then Deez Nuts of AZRD’s awesomely-named travel team Tent City Terrors smacked down any illusions of an easy win with a 19-point scoring tear. From there, the lead bounced back-and-forth as the Terrors fortified their defense to answer the Shakers’ ambitious scoring runs. Score at the half: AZRD 59, SCDG 55.

The Shakers’ NOS even up the score right out of the gate in the bout’s second half, and Moonraker widened the gap even more—within 10 minutes, the Shakers led the Terrors 97-72. But then they got cocky and laid back a bit too much: Subsequent jams by Robin Bank, Knockout Knicko and Vixen Tequila put AZRD back on top, even as their defensive pack fell apart. Shakers blocker Beracooter was sent flying through the crowd at one point, but no beers were spilled—possible tragedy averted. Final score: AZRD 115, SCDG 110.

In the next half of the night’s double-header, undefeated Salt City home teams Leave It to Cleavers and the Death Dealers faced off. The Cleavers’ Dirty Pirate Hooker and China White outpaced the Dealers’ Moonraker and Roller-Her Kitty early on in small scoring increments, keeping the red-clad housewives just barely ahead of the purple ninjas. As the Cleavers’ defense weakened, Moonraker took advantage and speedily shot the Dealers ahead by 2-3 points for several jams. Score at the half: Death Dealers 46, Leave It to Cleavers 43.

In the second half, with both teams visibly winded and skaters going down flatter than taco shells on State Street left and right, the Dealers maintained their narrow, upset-destined lead jam after jam. The Cleavers’ diminutive Contessa Danger would have taken home the trophy for Most Knocked-Around Player of the evening, if there were such a prize (and why isn’t there?). Final score: Death Dealers 98, Leave It to Cleavers 81.

Shots from Saturday's bout by O’Durgy (First two: SCDG in black, AZRD in pink. Second two: Death Dealers in purple, Leave It to Cleavers in red): 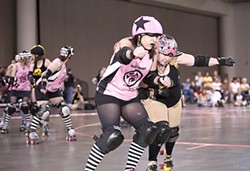 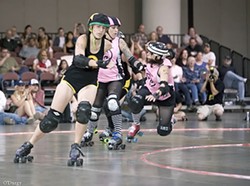 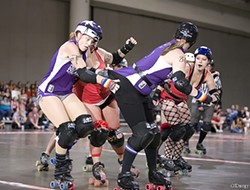 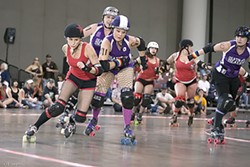