There’s an unwritten pop-music rule that artists aren’t allowed to age gracefully, unless they play country. Paul McCartney put a stake through the heart of that myth Tuesday.---

Proving remarkably spry and even downright boyish at 68, McCartney led an excellent four-man band through nearly 40 songs over the course of almost three hours at sold-out Rio Tinto Stadium in Sandy. In delivering a mix of Beatles tunes, solo works and Wings songs—many of them classics of the rock canon--McCartney rarely paused, and didn’t seem affected by the altitude in the least.

Instead, he mugged for the crowd (and the cameras projecting his image to the 20,000 or so people filling the soccer stadium), bouncing from bass to guitar to piano depending on the tune. He seemed aware of the reverence of his fans—obvious from the signs people held up, and the Beatlemania squeals he’s got to be really sick of after 50 years. But McCartney did his best to turn the show into a party, not a precious run-through of oldies, and it largely worked.

“Hello, Utah! I think we’re going to have a little bit of fun tonight,” McCartney announced after an early take of “Jet,” and just before “All My Loving,” the first of the Beatles tunes to come accompanied by archival videos on the LED screens covering the rear of the stage and the two speaker towers on the sides.

The early portion of the show was the most adamantly diverse, with songs popping up from across his half-century career. “Letting Go” showed off his still-underrated and tough bass playing. “Drive My Car” was clearly a crowd favorite. “Highway” from McCartney’s “The Fireman” side project was surprisingly strong, given most had never heard it. And he swirled “Let Me Roll It” into an instrumental jam of Jimi Hendrix’s “Foxy Lady” before telling a story about Hendrix learning the title track of Sgt. Pepper’s Lonely Hearts Club band in just two days after the album was released.

McCartney moved to the piano for the first time after that early burst of songs, playing “The Long and Winding Road” and a couple of others before strapping on an acoustic guitar for a solo take on “Blackbird.” Soon after, he introduced “Here Today” as a song he wrote after his Beatles partner John Lennon died, the tune acting as “a conversation we never had.”

This was McCartney’s 200th show with this particular band, and the men backing him—guitarist Rusty Anderson, guitarist/bassist Brian Ray, drummer Abe Laboriel, Jr., and keyboardist Paul Wickens--were roundly excellent. Not only were they skilled musicians, but fine harmony singers as well, judging by the soaring take on “Eleanor Rigby.” 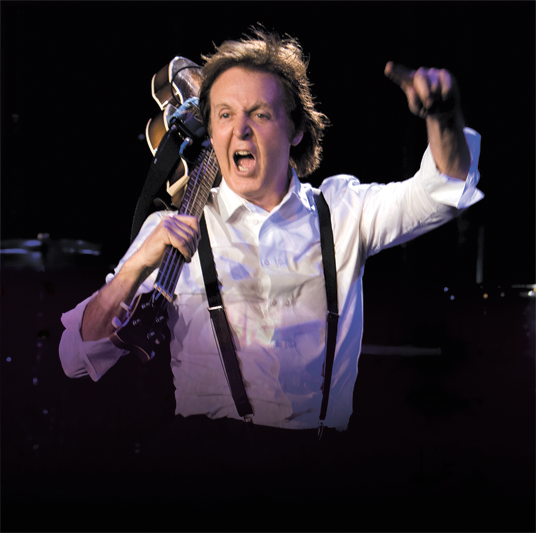 McCartney strapped on a ukulele for “Ram On” and a tribute to George Harrison featuring a long video montage and an awesome take of Harrison’s “Something;” this cover of one of his old bandmates’ tunes was one of the best performances of the night, easily, evolving from a low-key acoustic tune into a fully electrified monster by its end.

As great as “Something” was, that marked only the halfway point in the show, and the latter half was manna for Beatles fanatics, including a slew of the band’s best songs. “Ob-La-Di, Ob-La-Da” and “Back in the USSR” turned into massive singalongs. “Paperback Writer” was notably tough, a truly rocking take. An homage to Lennon melding “A Day in the Life” and “Give Peace a Chance” garnered a massive roar as McCartney requested “Let’s hear it for John!”

“Live and Let Die,” presented with a series of explosions and assorted pyro effects, was the last of the non-Beatles tunes, and when it was done, McCartney launched into a string of classics hard to comprehend coming from one songwriter. “Hey Jude” closed the massive main set, and the two encores included a raucous “Daytripper,” “Lady Madonna,” “Get Back,” “Yesterday,” “Helter Skelter” and the “Sgt. Pepper’s Lonely Hearts Club Band” reprise bleeding into “The End.” And what better way to end a McCartney song that with that classic line: “And in the end, the love you take is equal to the love you make.”

There was certainly a lot of love in the room Tuesday. As one woman’s sign beseeched McCartney: “Paul, you’re in Utah. Marry us!” No doubt there would have been more than one taker if McCartney made that proposal.