Keeping with the comic book theme this week, a lot of people have gotten into the habit of buying complete graphic novels. If you like most readers you tend to head into your local shop and buy the latest issue every month. But for those who either can't afford the monthly upkeep or have the patience to wait, the hardbound edition is the best way to go for select readers. Compounding 6-8 issues into a single book, making it more of a complete book than a series. And its because that trend has become popular that a brand new club started up in support of it. 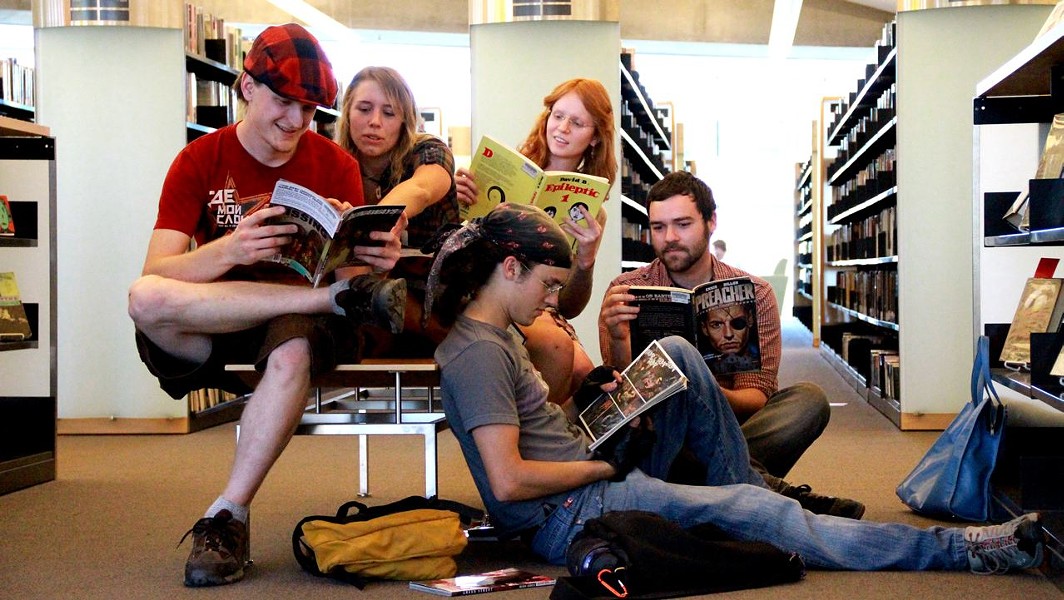 --- The Graphic Novel Club kicked off earlier this year at the Main Library, bringing in people who wanted to explore specific titles with the same passion and expansive thought others would take to literary greats, with material both famous and unknown. We got a chance to chat with the club's authority figure, Rachel Getts, about the club and the books they've been checking out, and info for those of you interested in joining. Plus her thoughts on comics in general.

Gavin: Hey Rachel! First off, tell us a bit about yourself.

Rachel: I grew up here in SLC, and then after various life detours went to the University of Utah studying Film and English.

Gavin: How did you first take an interest in comics and what were some of your favorite titles growing up?

Rachel: I read comic strips in the Sunday paper. I was a big fan of the comic strip Garfield, Doonesbury, and The Far Side. Unfortunately there wasn’t a comic store near where I lived so I could only pick up what I saw at the 7-11. Their selection was terrible and spotty. I didn’t really get serious about it until the early 90s with "X-Men" and "Batman: The Animated Series". Those were awesome and I wanted to be a comic geek. Unfortunately then the companies went through a big collapse and the direct market began. With no comic shop near me to shop at, no internet, and no money, I had to move on to other interests. When I started working at the library I took a keen interest in the graphic novels and I’ve become the comic geek I always wanted to be.

Gavin: What made you want to work for the Main Library, and how was it for you getting employed and working your way up?

Rachel: My mom is a librarian, and has been for almost thirty years. I grew up in libraries. So after spending my early-to-mid twenties wandering in the job wilderness, I decided that a career helping people was a cool idea. So I started out as a volunteer and just kept applying for every position that opened. In order to get a job in the library system you have to be persistent. It’s not easy. But I kept working hard, improving my skills and knowledge, and didn’t give up. I’ve grown to love the fact that librarianship, and libraries in general, are about public service. Helping people is a great feeling.

Gavin: How did the idea for the Graphic Novel Club come about?

Rachel: Actually it was first proposed to me by Mary Anne Heider, who is in charge of selecting young adult books and graphic novels. She recruited me to develop it with her in November 2009. We saw that graphic novels are insanely popular with patrons of all ages. I think that a major part of the fun is being able to talk about graphic novels with other readers or fans. Personally I thought it would be great to be able to meet with a group and talk about books and characters I love. The library is a natural vehicle for a club such as this because we have the space and the books. Unfortunately because of shifting responsibilities Mary Anne had to drop out and I took over. I then recruited Isabelle Roehrig to join me and here we are.

Gavin: What did the library staff think of your proposal? And was there any hesitation over the content?

Rachel: Those of us on staff who are graphic novel readers and fans were ridiculously excited. Everyone else was pretty ambivalent. Nobody has mentioned any hesitation over content since we focus mainly on patrons who are 18 and over.

Gavin: What are the guidelines for the club and the kind of topics you'll discuss?

Rachel: Based on suggestions Isabelle and I pick a book to discuss. It can be an original graphic novel, or two volumes of a series. The only real guidelines are that the book be in print and available at the library. So we all read the book and then talk about it. We’ve had some pretty wide-ranging discussions, but we try to keep things positive and fun.

Gavin: When you kicked off, what was the first title you chose, and why?

Rachel: Our first meeting was in February where we talked about the first two volumes of Y: The Last Man. Ever since then we’ve met bi-monthly, where we’ve discussed Scott Pilgrim vs. The World and Fables Vol. 1 & 2. August 28 will be our fourth meeting, and we’ll be talking about Alan Moore’s classic V For Vendetta. Everyone, including myself, wanted to do an Alan Moore book. He’s the most amazing legend/sorcerer/genius of comics. Of course the first thought was to do Watchmen, but after last year I’m a little “watchmen”-ed out. So then I saw that Guy Fawkes Day was November 5th, which is pretty close to our meeting date. V For Vendetta features a character who takes up a Guy Fawkes mask in order to battle a fascist government. Seemed like a ripe book for discussion so I went with V for Vendetta.

Gavin: Are there any plans to invite guests down the road who had a hand in these books?

Rachel: That’d be awesome. We’re hoping to partner with some local organizations to coordinate either author events, like we recently had with Dark Horse writer/editor Scott Allie, or teleconference opportunities.

Gavin: Will you be including locally produced works as well, or sticking mainly to major titles?

Rachel: I hope we get to talk and meet with local artists and authors. We’ve already reached out to local artists such as Brady Canfield through our Facebook page.

Gavin: Talking comics for a bit, what's your take on the comic book industry as it stands right now, both good and bad?

Rachel: I am a bit worried about the saturation of comic book movies. So many new series seem to be developed just to get a movie deal. Such was the case with Kick-Ass. But for every "Dark Knight" we get a lame movie like "Jonah Hex". That movie could've been awesome. I believe that the fad of comic book movies will all depend on next year’s Green Lantern and Thor. From what I’ve seen I think "Thor" looks awesome. Marvel seems to have the right plan. Geoff Johns will bring more of that to DC’s movie properties. I love, love, love some of the innovative choices that DC comics have made over the last year. Developing the Batman line, making Dick Grayson Batman, Detective Comics Batwoman, signing up artist/writer Jeff Lemire, and Darkest Night were all great. On the Marvel side Fantastic Four has become one of my favorite books due to the magic of new writer Jonathon Hickman. It’s a fun book that has been totally revitalized by a super-smart writer.

Gavin: What are some of your favorite series in print right now?

Rachel: In my opinion the best series in print right now is The Walking Dead. It’s been consistently good for 75 issues. That’s five years! And once you think that everything’s going to be fine with these characters then something horribly awful happens. It’s so great. Also I’d like to throw in a shout out to Detective Comics' Batwoman which was my favorite series last year and this year. I can’t wait for it to come back.

Gavin: Where do you see the state of comics over the next couple of years?

Rachel: Right now the comic book industry is seeing a major shift toward digital comics. I can see the end of the single-issue monthly comic in the next 5-10 years. That makes me kind of sad, but I totally get it. I’m one of those people who like to hold the book in my hand rather than read it off a screen. However, digital comics will drastically change distribution and hopefully bring more fans to the hobby. It also doesn’t help that they keep raising the prices of comics to $3.99. That’s no good.

Gavin: Going local, what is your take on the current local comic scene and the titles coming out of it?

Rachel: There are some great titles coming out of the region like Wombat. It’s primarily family-based which comes along with the territory I suppose. I’d like to see more innovative underground comics like we’ve seen with zines here in Salt Lake City.

Gavin: Who are some local artists and writers should people check out?

Rachel: Ryan Ottley’s work is amazing. He’s been killing it on Invincible for years now. Also Bill Galvan, who works for Bongo Comics on titles such as The Simpsons. He also does Archie. With the internet and digital artwork becoming the norm in the comic’s production industry I think that you no longer have to move to NYC to get into the comic industry.

Gavin: What can we expect from you and the club over the rest of the year?

Rachel: First of all we’ll be meeting on August 28th to discuss V for Vendetta. Then we’ll be meeting to talk about The Walking Dead vol. 1 & 2 on Oct. 30th. That will be awesome. Right now we’re in the planning stages for some cool fun events in November and December. You can keep track of everything we’ve got going on at our Facebook page by friending us.

Rachel: If there’s anyone out there who believes that graphic novels or comics aren’t for them then I urge you to come down to the library and talk to me or pick up a book list and check it out. I think one of the great things about graphic novels or comics is the wide variety that the genre encompasses. I really do believe that there’s a graphic novel for everyone. If you have any questions please feel free to email me at thegraphicnovelclub@gmail.com. I love meeting with people and discussing books.