Gov. Herbert's elephants in the room at LGBT reception 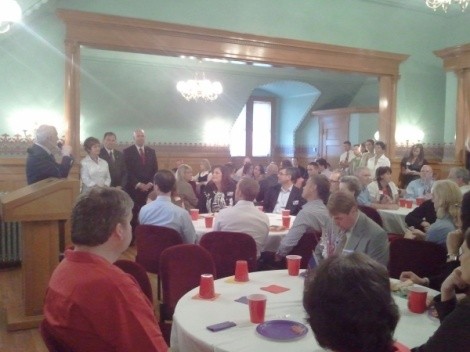 Utah Governor Gary Herbert welcomed the LGBT community last night at a reception hosted by Utah Log Cabin Republicans, but the gayest thing Herbert talked about was remodeling the Capitol.---

Herbert did use the phrase "Common Ground" once in passing, but it passed so swiftly no one could remember after the event exactly what he'd said about it. Moreover, neither Log Cabin's Mel Nimer, Equality Utah's Brandie Balken, nor even the governor's own communications director Angie Welling could recall a single instance in which the governor has even said the words "gay" or "lesbian" in public, much less "transgender."

I found this a bit strange, though many did not. The real story of the night, many said, was the immense symbolism of the governor inviting 160 people from the LGBT community to the Governor's Mansion at all. Yeah, sure, I'll grant that: Utah has the lowest percentage of people in favor of gay marriage of any state, so the reception is at least proof that the LGBT community has its foot in the door.

But if we're talking symbolism--I asked many people--isn't it symbolic of something that Herbert didn't discuss LGBT people or LGBT issues at an event planned exclusively by and for LGBT people and their supporters? I gathered answers to that question from several people who attended last night.

Utah Republican Party chairman Dave Hansen said Herbert's roughly five-minute speech on education policy, energy policy, and other political issues, addressed "things everybody talks about everyday." That's a self-fulfilling prophecy, I said: when you're the governor, people will frequently talk about what you are talking about. Hansen responded, what gay issue is so in-the-news and talked about that it has a real chance of being debated in the legislature this year? The municipal non-discrimination ordinances have been in the news all year (most recently Taylorsville earlier this month), and many are calling for statewide protections, I said. Hansen brushed that off non-verbally and returned to the common refrain: "The simple fact that it is here in the mansion with the governor and the lieutenant governor was bigger than anything he could have said."

Activist and blogger Eric Ethington called the governor's speech "tasteless and classless." How so? "I can't believe the insensitivity of spending five minutes talking about his spouse ... when he is vehemently opposed to gay marriage." On his Pride in Utah Blog, Ethington goes further, calling the event a "spit in your face;" in the same post, he also calls the governor a "clueless bigot." Ethington also quotes Herbert as contrasting "normal" behavior to "effeminate" behavior in his one-on-one chat with him.

Log Cabin's Mel Nimer said former governor Jon Huntsman, who started the LGBT reception tradition two years ago, never mentioned gay issues at the event either. The First Ladies in both previous years, Nimer said, did mention LGBT people in their comments, but even that was missing last night. No problem, no symbolism, nothing to see here, Nimer said. "What you do speaks much louder than what you say."

Republican candidate for House district #25, Rick Raile, said the governor may be uncomfortable talking about LGBT people and LGBT issues in part because he's from an older generation. "I've had that [interactions with LGBT people] again and again ... [But] mixing with different groups you're not typically with takes some getting used to."%uFFFD

Herbert's spokesperson Angie Welling said the governor does not tailor his standard campaign stump speech for particular interest groups. He's given that same speech dozens of times, Welling said, so much so that she could deliver parts of it. "Those are the topics that matter to him now."

Businessman Jim Dabakis, who has met privately with the governor to discuss LGBT issues and policy, said Herbert "is not one of the ideologues in the Republican party," meaning Herbert could be persuaded to be more gay friendly. He defended the governor's lack of mention--much less attention--to LGBT issues. "You can't expect people to emerge one day with complete comprehension of every issue," Dabakis said. That seems a bit patronizing, I said, when referring to a seasoned politician like Herbert who is not only the current governor but is seeking reelection. Comprehension of the issues is his job. "He's learning," Dabakis said.

To those who sympathized with or defended the governor, I also asked them this: Let's say the governor is reelected (his challenger, Democrat and Salt Lake County Mayor Peter Corroon, is a one-man PFLAG parade float in comparison) and in the next four years, let's imagine Herbert continues the LGBT reception but still has never actually mentioned LGBT people nor their issues. At what point would you get pissed? It's a tough, hypothetical question that understandably no one had a great answer to, except maybe Dabakis, who apparently has the governor's ear: "I would be shocked if he didn't say the words 'gay' and 'lesbian' next year," Dabakis said.

So, this is queer life in Utah. The first time the governor actually says "gay" or "lesbian" will be chalked up by some as a victory for gay rights. One step at a time, folks, one tiny step at a time.