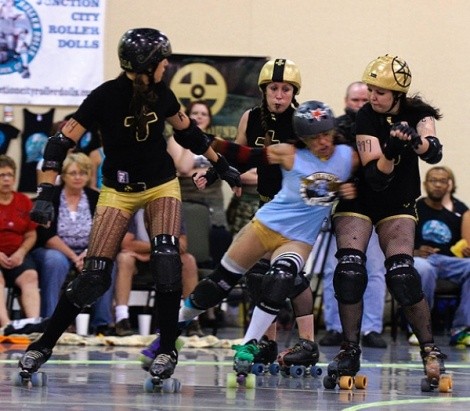 Well, it wasn’t all action: You’d calculate that a roller-derby bout consisting of two 30-minute periods would take a little over an hour, but the first half of Saturday night’s double-header at Layton’s Davis Conference Center (SCDG’s Sisters of No Mercy vs. JCRD’s Hilltop Aces) took two, thanks to a late start, a couple of minor on-track injuries and a staggering amount of overlong timeouts. It was like the NFL in fishnets.

When actual skating was going on, it quickly became clear that Salt City’s Sisters underestimated Junction City’s Aces from the outset: While they got on the scoreboard first, the Sisters’ erratic, messy defensive pack and tentative jamming fell behind the Aces’ cool/confident attack within the first 15 minutes. Also, Sisters filled the penalty box for most of the bout, and eventually a grand total of three nuns were ejected from the game entirely. The Sisters did pull back ahead briefly, but the Aces’ four-pronged jam assault of Sarin Gasp, Colonel Skirts, Clam Jammer and D-Vine couldn’t be contained.

In technical sports terminology, the Sisters got their shit together in the bout’s second half, despite continued residency in the penalty box. A pair of impressive scoring jams from Ashes to Ashes put the Sisters back on top momentarily, though it was answered by an equally impressive pair of runs by Colonel Skirts and Sarin Gasp that pushed the Aces back ahead. The Sisters’ Nyda the Dead, aided by an impromptu self-whip off of teammate Crucifyher’s booty shorts, clinched the lead with a 14-point jam that the Aces never recovered from. Nyda also got in the Sisters’ final major penalty of the bout, unstrapping her helmet (one of the biggest don’ts in the Women’s Flat-Track Derby Association rulebook) and tossing it into the crowd during the last jam.

The second bout of the night’s double-header, SCDG’s Bomber Babes vs. JCRD’s Railway Banditas, couldn’t match the first in drama—fortunately, it was also short on timeouts and delays. The Banditas’ Zelda Cruz and Colonel Skirts (pulling double duty from the Hilltop Aces) scored first and high, setting the pace for the rest of the night. Despite having one of the fastest and savviest jammers in the Salt City league (NOS), the Bomber Babes have struggled throughout the 2010 season, and Saturday night was no exception—once they fell behind the Railway Banditas, there was no catching up.

The second half contained few surprises from the first—except for a few jams from JCRD’s Killa Patra, who hasn’t been seen on the track much this season, and a serious display of rump-shaker dance moves from the Bombers’ Ursula Savicious. Beyond that, it was Bomber-beatdown business as usual for the Banditas.

Next Utah bout for the Salt City Derby Girls and the Junction City Roller Dolls: Saturday, Sept. 25 at the Salt Palace; Sisters of No Mercy vs. Bomber Babes, and the SCDG all-star Shakers vs. JCRD’s all-star Trainwrecks. Tickets and info: SLCDerby.com and JCRDolls.com. Full schedule for all local roller-derby teams: Utah Roller Derby: 2010 Preview. 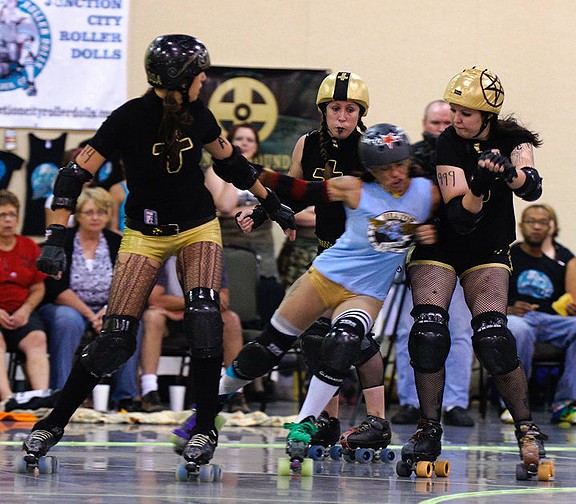