Saltas on Tour: Stuck In Greece

Hello from Athens, Day 2.5. I would have blogged yesterday but I spent much of last evening lying awake with the worst, by far, stomach ache of my life. If I die before I get home, please tell the doc to autopsy my stomach, not my head. ---I guess it was something I ate or drank, but I've done neither unusual. Also, I can't bear to even consider that the Greek food I enjoy so much over here would turn on me--but something did. Around 3 a.m., I finally dozed off and awoke just in time to miss the complimentary breakfast at our hotel. I wouldn't have eaten anyway.

Spent much of the day just wandering around, and here are a few photos of the places I visited. The guy on the horse is Kolokotroni, a Greek hero of the revolution against the Turks who is somewhat of a cross between George Washington and General U.S. Grant. I caught a cab on the street there, and the cabbie reminded me that Kolokotroni is a real throwback because back then--same as in the United States--our heroes fought at the front lines, not from the rear.

There are two Byzantine relics pictured today. One (above) is a small church called Agios Theodoroi (Holy Theodore) built around 1050 A.D.near Syntagma Square and the other (below) is the famous monastery, Kaisseriani, which is on the main route between Athens and the airport. Kesseriani is nearly hidden in a beautiful reforested on Mt. Hymettus area that seems light years from downtown Athens. It, too, dates to the 1000s and sprawls around the nearby hills.

The street scenes are typical. In one a vendor sells fruit to passersby, while next to him is one of the thousands of Peripteros (kiosks) of Athens. The second shot is of just a partial number of newspapers one can indulge in daily here--about 20 than in any many U.S. city. To say Athenians are not informed about the world would be a big fat lie. 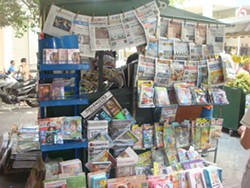 Finally, the food shots. Loukamades (left) are the donut looking things and are made similarly. These are from Doris Restaurant which opened it's doors in 1900. For dinner at Vyzantino Restaurant in the Plaka, we had--among many other items--stuffed grilled squid, these served with tomato and feta inside (right). Finally, today in the seaside neighborhood of Palio Faliron we had some cheese pies tied up real nice on top (below, left). You don't see them like this in SLC.

And....Stuck in Greece indeed. Our little elevator became stuck between floors at the apartment of some relatives. By the time the technicians arrived maybe 30 minutes later, all four of us inside were in various stages of heat stroke and dehydration. A real Greek mess for sure that I'd rather tell about than write about.

Till next time,
John