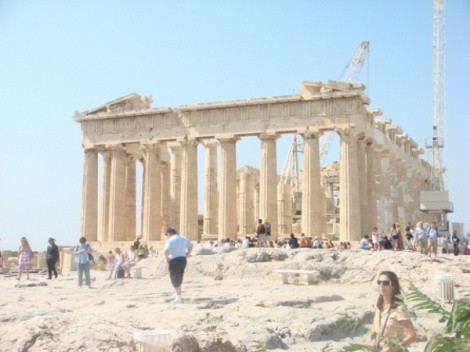 It's been a hectic 3 days in Athens, so much so, there's been no time to blog or write, only to eat, drink, see the sights, and avoid riots and striking truck drivers. ---

Until today, we thought the strikers were a novelty--I've seen a strike on each visit. However, when one is 40 miles from Athens and the major highway to get you back is blocked by semi trucks, you don't have time to be amused. Especially when you head to the train station to bypass the highways only to find the railroad is also on strike. We are all back safe and sound now with no worse for the wear, barring the fact we still don't know exactly what took place.

The one thing I can add now is that we have no concept, really, of what was taking place in Athens so long ago. Some of the exhibits in the National Museum date to 12,000 B.C. The craftsmanship on the statuary and jewelery from 5,000 years ago is stunning, let alone what took place here 2,500 years ago during the Golden Age of Greece when much of the present Acropolis, including the Parthenon was completed. Greece is the reminder to all of us, Greek or otherwise, that the human spirit is meant to appreciate beauty and that all things we call beautiful have an origin we can all relate to.

Finding our way back to our hotel may become another story on another day. Meanwhile, it's getting late and we have a 6 a.m. bus to catch preceded by at 5 a.m. wake up call. We'll be getting on the bus about the time Hope Woodside begins her Fox 13 News report. At 7:30 a.m.--or when the Letterman show begins for those of you in Utah--we depart by ferry to the island of Paros. Chill time.

Here are the photos I have time to put up today and not much more. Without much explanation, they comprise a Cliff's Note version of the Athens highlight film--scenes from the National Museum, the Temple of Olympian Zeus, the Acropolis, the Central Market, the Roman Agora, Tomb of the Unknown Soldier and some street scenes tossed in just because. Good night from Athens.