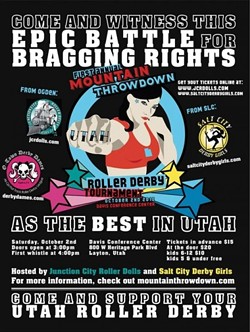 SLC’s Salt City Derby Girls (who finished third out of eight regional leagues at the Spudtown Knockdown in Boise last month) and Ogden leagues Junction City Roller Dolls and O-Town Derby Dames played three 30-minute rounds to determine which two leagues would battle it out in the final full-hour bout. This added up to five hours (!) of roller derby and a whole lotta protective-pad stink.

First up at 4 pm, O-Town’s 25th Street Brawlers (in pink) took on the league that spun off from them two years ago, Junction City Roller Dolls’ Trainwrecks (black). Within 10 minutes, JCRD was up over O-Town 30-6, a gap soon widened by JCRD’s Colonel Skirts with a 25-point jam. O-Town jammers No Name Dame and Smashleigh pushed hard to even the score, but to no avail. Final score: Junction City Roller Dolls 84, O-Town Derby Dames 27.

Next, the Salt City Derby Girls’ Shakers (in yellow) took on the just-victorious JCRD Trainwrecks. While SCDG jammers China White and Moonraker are unstoppable point machines, JCRD’s Zelda Cruz and Sarin Gasp are nearly their equals—made even more obvious when Moonraker was ejected late in the bout for penalties. Surprising everyone (including possibly the referees, who’d made several WTF? calls up to that point), the Trainwrecks tied the score in the final jam, 47-47. In a two-minute tie-breaker jam, SCDG’s RollerHer Kitty took the Shakers over the top—but just barely. Final score: Salt City Derby Girls 56, Junction City Roller Dolls 55.

Third, in a far less eventful bout, SCDG faced off against O-Town. Despite several strong jams by Smashleigh and No Name Dame, O-Town was outgunned on every front by SCDG—particularly in defense, where blockers Phatal Pheromone and Miss Mafiosa’s brutal dual attack couldn’t be matched by O-Town’s entire pack. Late in the bout, O-Town’s Starbright Wanna Fight was taken out with an ankle injury as the Shakers cruised to an easy win. Final score: Salt City Derby Girls 124, O-Town Derby Dames 53 (meaning they took the bronze for the night).

The Mountain Throwdown’s final full-hour bout, between the SCDG Shakers and the JCRD Trainwrecks, wouldn’t be as tight as the two teams’ earlier meeting. Both were aggressive from the outset, with JCRD pulling ahead briefly—until China White ratcheted up the spread with a 13-point jam, followed by several scoring runs from Moonraker. After that, JCRD seemed stuck and unable to gain significant points for the rest of the period. Score at the half: Salt City Derby Girls 94, Junction City Roller Dolls 10.

JCRD fared no better in the second half: Within 15 minutes, SCDG was up 132-12. Confident in their lead, the Shakers pulled out every roller-derby trick in the book—leg whips, sub jammers and the nowhere-as-dirty-as-it-sounds “panty pass.” Final score: Salt City Derby Girls 177, Junction City Roller Dolls 21.

Following their Mountain Throwdown win, SCDG’s next bout is also their season-finale 2010 Championship: The Leave It to Cleavers vs. The Death Dealers, Saturday Oct. 16 at the Salt Palace. Tickets and info: SLCDerby.com. JCRD plays next on Saturday Nov. 6 at the Davis Conference Center in Layton; tickets and info: JCRDolls.com.

All photos from Saturday’s bout above and below (final game) by Liquor'n Shooter: 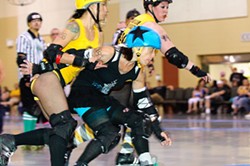