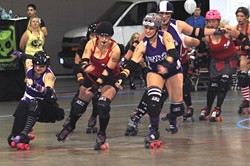 Saturday, Oct. 16: After a long season of local double-headers and out-of-town victories, the Salt City Derby Girls capped 2010 with a Championship Bout between the Death Dealers and the Leave It to Cleavers. ---

The Salt Palace was packed (and forced to wait an hour past the posted start time) Saturday night to see the undefeated Death Dealers take on two-season SCDG champions the Leave It to Cleavers in a tussle for the ’10 tiara. The Cleavers not only had the pressure of a possible 3-peat bearing down on them, but also the memory of Barbara Billingsley (June Cleaver of Leave It to Beaver fame and team inspiration), who’d passed away earlier in the day, to honor. The Dealers, they were just out for their first-ever Championship win.

The Dealers’ focus on the prize showed from the first whistle, shooting past the Cleavers and scoring first; Dealer jammer RollHer Kitty outpacing long-absent returning Cleaver Dirty Pirate Hooker (who’s retiring this season after five years with the league). Cleavers jammer China White subsequently evened the spread, but a triple “hot trick” (15 points) from RollHer Kitty and further high-scoring jams by Moonraker shut down any hope for the housewives by the half.

Score at halftime: Death Dealers 79, Leave It to Cleavers 39.

Star Cleavers jammer China White, who’s also retiring this year, essentially relinquished the line to up-and-coming team jammers Contessa Danger and Muffin Splitter in the second half, and Dirty Pirate Hooker took the majority of jams in the game’s homestretch. On the Dealers side, ’10 SCDG rookie The Instigator jammed a handful of times and showed off some impressive roller-acrobatic skills, if not scoring savvy. With their ever-widening lead over the Cleavers, the purple-clad ninjas didn’t need the points, anyway.

Final score: Death Dealers 142, Leave It to Cleavers 77, making the Death Dealers the 2010 Salt City Derby Girls Champions (even if the balloons never quite dropped from the ceiling).

Besides Cleavers Dirty Pirate Hooker and China White, also retiring from roller derby after Saturday’s bout are Dealers Bombshell Bruiser, Chase N’ Tail and Movin’ Violation. Segue: SCDG will be recruiting “fresh meat” (new girls) to build up the league for the 2011 season; tryouts are at Sandy’s Classic Skating (9151 S. 255 West) on Saturday, Nov. 20, 8-10 a.m. Skaters must pre-register at SLCDerby.com to try out.

Pics by The Word Street Team here. Half-assed shots from Saturday’s bout below by me—you were missed, Liquor’n Shooter (Death Dealers in purple, Leave It to Cleavers in red): 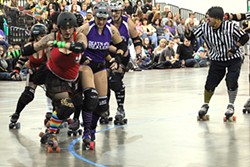 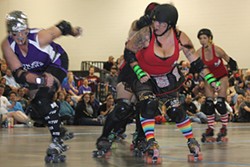 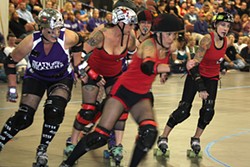 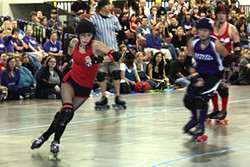 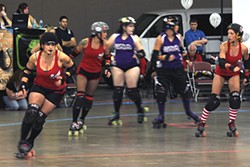 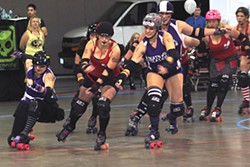 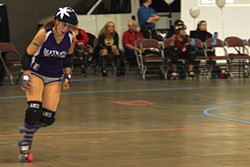 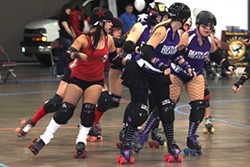 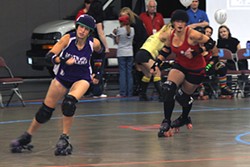 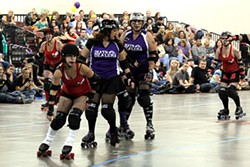 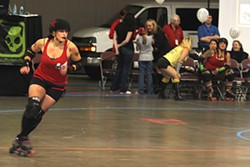 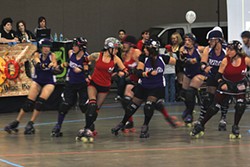 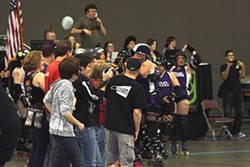 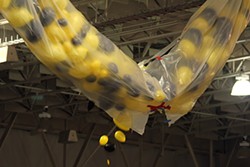