An Alternate Ending to "Goldilocks and the Three Bears" | Buzz Blog

An Alternate Ending to "Goldilocks and the Three Bears" 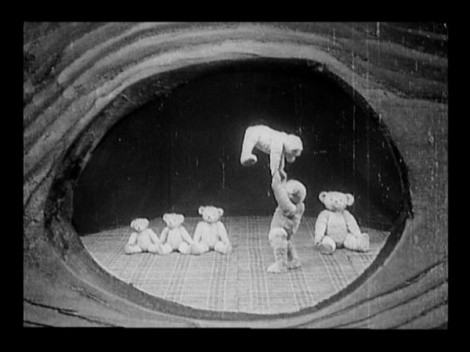 Turner Classics recently aired a collection of Edison Studios films from the 1900s--- -- fascinating, early, nickel-admission stuff without intertitles, production credits or even recognizable stars (the Hollywood studio system wasn't yet in its infancy, and wouldn't fully emerge until a decade or two later).

While watching the 1907 Edwin Porter film The "Teddy" Bears, I was struck by two things:

First thing: It must have taken more than a generation or two before The "Teddy" Bears came to be recognized as an artifact of film-historical value. Before that, it was probably regarded as children's entertainment -- by adults who couldn't be bothered to sit down and watch an old-timey adaptation of Robert Southey's "Goldilocks" tale.

But, if you will take the time to watch it, you'll find it's not a delightful romp for kids. It's weird and experimental -- and, to tell the truth, actually pretty creepy. There is a scene starting around 3:10, in which Goldilocks peeps through a knothole to observe a stop-motion-animated sequence of dancing bears.

The "Teddy" Bears 1907 by Edwin S. Porter from Buddy Society on Vimeo.

What are these six extra bears doing in the house at all? Why are they in a locked room with a peephole? Are they even real, or do they exist merely in Goldilocks' fevered imagination? And, if they're real, why have they been imprisoned there and forced to dance for the Three Bears' voyeuristic pleasure?

It's positively Lynchian, like something out of Eraserhead. Yet, for decades, parents probably thought this picture was suitable for their young offspring -- imagine being a kid and seeing this some Saturday morning! What the fuck is that?!? you'd think. And you'd be warped for life.

And that chase sequence through the bleak, snowy woods? Shudder. Without the happy, bouncy piano music, it's a horror movie. And then, suddenly Teddy Roosevelt shows up, kills Mama and Papa Bear, imprisons Baby Bear, and liberates the six dancing teddies?! Whaaaaa?

Who knows? Maybe that's how David Lynch got his start.

Second thing: The original "Goldilocks and the Three Bears" story (without the imprisoned teddies or murderous Roosevelt) never made much sense to begin with. Yes, there's something delightful in how everything comes in threes: Not only is there a Mama Bear, a Papa Bear and a Baby Bear; but each possesses a bowl of porridge, a chair and a bed. And each of these attributes is either too hot/big/hard, too cold/small/soft, or else "just right."

It's great, up to a point. But, in the end, where is the punchline? Baby bear cries, "Someone's been sleeping in my bed, and she's still there!" This rouses Goldilocks from her pastoral torpor, and she jumps out a window, running as fast as her little legs can carry her.

For such an obsessively balanced and symmetrical story, this dénouement is unsatisfying -- it violates the pattern somehow. There seems to be something left unsaid, as though it were tacked on at the last minute.

The more logical ending to the tale is much different: Obviously, the Three Bears caught Goldilocks and ate her.

And, as they were warming their feet around the fireplace with the remains of the human child still roasting on a spit, Mama Bear, Papa Bear and Baby Bear sat back contentedly in their Three Chairs and sighed -- for, as it turned out, Goldilocks was "just right."